Oh, yeah, because that looks SO much better than the big starfish.

So I'm reading the early preview solicitations for DC's October books, and according to the copy for the R.E.B.E.L.S. annual, this yahoo here... 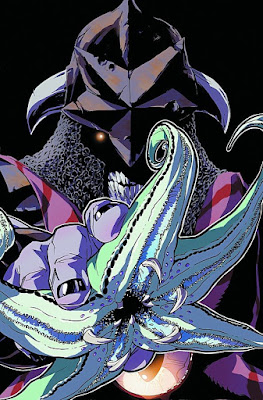 is the new Starro the Conqueror. Or, as they're trying to pass off, the guy who has been the "real" Starro all along.

Really? Armor, spikes, and a skully-lookin' face? Why not just give the guy some pouches, arm-blades, and giant, triggerless laser guns while you're at it, guys? I guess I shouldn't be shocked, given that hologram foil covers are coming back, too, but seriously Comics Industry, can we all please please PLEASE finally move past this need to reconceptualize old, corny characters in order to make them greater threats, badass, or - Kirby help me - kewl?

Sometimes the appeal of these silly characters lies entirely in the fact that they are silly characters. A dude from outer space who takes over people using millions of starfish that attach themselves to people's faces? And he calls himself Starro the Conquerer on purpose? No matter how you dress that up, that's just goofy, man. By that point in the concept, making the character into a giant space starfish actually makes more sense than not. 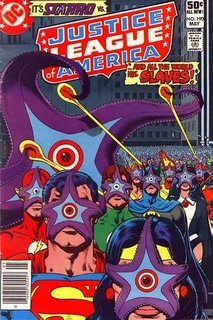 Every time one of the companies does this - and let's be honest, it's usually DC lately - it smacks of desperation. It's like those kids you knew in middle school who would walk around telling anyone who would listen, as well as most of those who wouldn't, just how grown up they were now. And, of course, the only people actually buying into it were the kids themselves, because everyone else understood that the more you walk around declaring yourself adult, the less you adult you are.

Same thing here, more or less. Making your space starfish guy into a World of Warcraft reject is not the path to sophisticated entertainment for a grown up audience (though it is, sadly, exactly the entertainment those kids walking around thinking they're grown up are looking for). But - and maybe I'm being a little naive here - I think that telling an interesting story with the starfish (and maybe one that isn't afraid to embrace the inherent silliness of the character at that) is.
at July 19, 2009
Labels: Bill kinda hates fandom sometimes, comics, DC, ranting