And you may find yourself behind the console of a small police box...

This has to be one of the greatest weeks - maybe even THE greatest week - in the history of nerdy television. There's Apollo 11 anniversary coverage all over ther place, those of us in the U.S. who don't know how to find shows online finally get to see the Torchwood: Children of Earth mini-series and Doctor Who: Planet of the Dead special on BBC America, and in Wales, they've started filming Matt Smith's first episodes as the new Doctor Who. And thanks to the British press, we've already gotten a look-see: 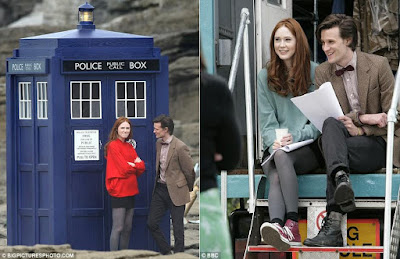 And an accompanying article, of course.

Not a lot to go on - just some costumes and finally a name for The Adorable Karen Gillan's character, Amy Pond, but hey, I'll take what I can get.

Predictably, the new Doctor's outfit is getting all the usual criticism, but I dig it. It's Buckaroo Banzai meets David Byrne in the "Once in a Lifetime" video meets the hip young high school physics teacher. And for my money, that's pure Doctor Who.
at July 20, 2009
Labels: Doctor Who, TV
Newer Post Older Post Home