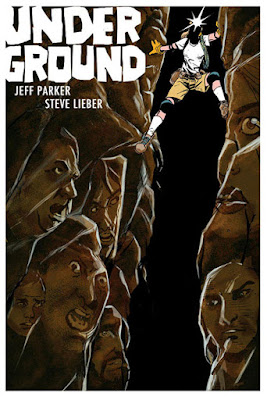 I think I've made it pretty clear that I'm a big ol' Jeff Parker fanboy, so I was pretty psyched to find a preview of his new Image mini with Steve Lieber, Underground, in my inbox the other day. And if the rest of the series is as good as this first issue was, this book is going to be a fun ride.

It's the story of two Kentucky park rangers trying to prevent a local cave, and a genuine natural wonder of one at that, from being turned into an attraction by the government. It's a thorny issue, since although the cave requires protection to maintain its delicate environmental balance, the depressed community could really benefit from the tourist dollars. And naturally, the local entrepreneur spear-heading the effort stands to gain the most. So when some folks begin unauthorized blasting in the cave, it's probably safe to say that there's some skulduggery ahead.

It reads quite a bit like a movie (though not like a failed movie pitch reworked into comic form), and the scene is set in subtle, effective ways. We get some background thanks to the good old "expository news report" chestnut (which is handled in a clever way, and not the usual "FLASH! The Harlem Globetrotters have been lost at sea in the Pacific!" sort of way), and we learn a lot about the main characters in the best way possible: we see them for who they are, through how they act, what they say, what they don't say. Lieber here has a knack for facial expression that I think is only matched by Kevin Maguire and Terry Moore. Just wonderful stuff. 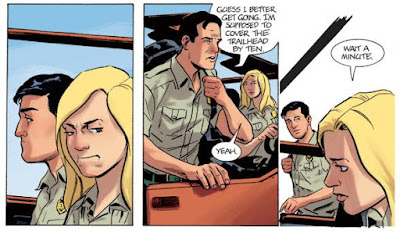 Parker's script really surprised me, too. Coming into this having read a lot of his Marvel work, Mysterius the Unfathomable, and The Interman, I was surprised by just how down to earth this was. I knew he'd be able to handle the action elements well, but wouldn't you know it, he can write reg'lar folks, too.

Long story short (too late), this is a great book by talented creators. If you like some of your comics in the Queen & Country / Whiteout / real-life adventure vein, you'd do well to check this out. Check out the website for more info, including a preview.