Reactions to recently read comics. Not very timely - rather untimely for the bulk of this edition, in fact - but quick.

Detective Comics #854 - I was going to pass this by and maybe check out the collection from the library some long distant day, but I saw a copy on the stand and that J.H. Williams III artwork - already great, true, but enhanced to the power of a bajillion by Cameron Stewart's coloring - called out to me like a Siren to Odyssius (Wait, is that too heavy an allusion? Like a cheeseburger to John Goodman, then?). This book is a thing of beauty to behold. I mean, come on, look at this: 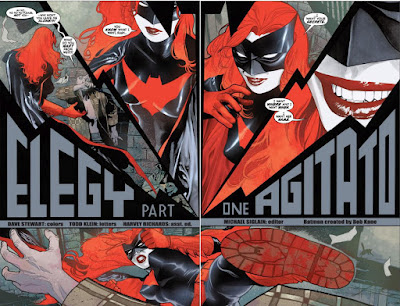 Street violence never looked so purty... love how Stewart's reds just pop like that. And the story was good, too. Considering I've never read any of the previous Batwoman / Crime Bible stories, nor cared to in the first place, I was sucked into this one pretty quickly, and got a good feel for the character, her place in the world, and why I should care. But Greg Rucka's good like that, I suppose. Still going to wait for the collection to read the rest, I think, but this just got upgraded from "eventual library read" to "need to buy this so I can have pretty, pretty head kicking on my bookshelf."

The Old (or, "Wow have the 50 cent bins been outstanding to me lately.")

Batman #686 & Detective Comics #855 - Parts 1 and 2 of "Whatever Happened to the Dark Knight?," Neil Gaiman's post-R.I.P. fairy tale ending for Batman. It's a shame that the title was specifically chosen to harken back to Alan Moore's amazing Silver Age Superman ending opus, "Whatever Happened to the Man of Tomorrow," because it doesn't measure up, but as one of Gaiman's patented "stories about stories," it does its job very well in that its more about the idea of Batman than the man, and how no matter the setting or circumstance, that core concept of Batman will always remain the same. So metatextually, Gaiman is saying that Batman is pretty much writer-proof, and that if you don't like what's going on now, be patient and eventually you'll get the Batman you want.

Next Issue Project: Fantastic Comics #24 - Image's first stab at continuing long-dormant public domain Golden Age comics (are public domain Golden Age comics characters the new zombies, by the way?) is, like any anthology, a mixed bag. Some folks play it as straight-up GA tributes, others take a more post-modern revisionist approach, and one or two come right out and play it all for laughs. While on the one hand I wish they had taken just one approach and run with it (especially in the coloring... either they all need to look like aged and yellowing comics from the 40s or none of them do, you know?), it's still all pretty good, and it's hard to argue with a line-up that includes Erik Larsen, Mike Allred, Bill Sienkiewicz, Ashley Wood, Jim Rugg, B. Clay Moore, Joe Casey, and Fred Hembeck. Let's get the promised follow-ups out, Image!

The Core #1 - This was one of last summer's Top Cow Pilot Season books that I was always interested in but never managed to track down. Wish I had, because I would've voted for this in a heartbeat. Jonathan Hickman's story reads like a good sci-fi TV series - a galactic federation's black ops team gets its first human member, who quickly gets his trial by fire - with all manner of tight action sequences and intrigues and double crosses and such, and it's gorgeously illustrated by Kenneth Rocafort, the guy who managed to make Paul Dini's Madame Mirage more than just another cheesecake book. Maybe this will come around again, anyway, despite how the voting turned out, but given the Marvel assignments on both men's plates, I'm not gonna hold my breath.

Transhuman #1 - More Hickman, though this time it's more hard sci-fi as opposed to space opera blow-'em-up, beginning the story of human advancement through genetic engineering and cybernetics, told as if it were a PBS or cable documentary. It's an interesting approach to this type of story, and I wonder why it hasn't been used more often, because it works so well here. Definitely going to go back and read the rest.

R.E.B.E.L.S. #1 - I appreciate the attempts to link this to the threeboot Legion of Super-Heroes, but at this point, why bother? Also, Tony Bedard's run on LSH is what actually got me to drop the book for a while, so it's not like his use of the characters (well, two of them) harkens back to particularly good times for me. And lastly, I never particularly cared for L.E.G.I.O.N. or the Omega Men. Some folks I trust liked this, so I tried it, but yeah, it's not for me. At all.

Jersey Gods #1 - So the elevator pitch for this is that a guy who is basically Orion from the New Gods falls for a human woman from New Jersey, and antics ensue. It's an interesting premise, but we barely get even the beginning of that here - they meet, sort of, in the midst of the Big Fight, and come back next issue. Not a lot of "there" there for a first issue, you know? The art by Daniel McDaid is fantastic, though... channels Kirby without seeming like an outright pastiche. I'd love to see more from him - I'm really hoping IDW gets the rights to reprint his Doctor Who Monthly strips - so maybe I'll check out future issues, but I'm not sure right now.
at June 29, 2009
Labels: Batman, Batwoman, comics, DC, Doctor Who, Image, Legion, Marvel