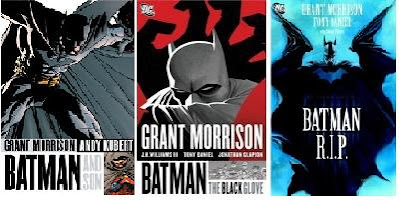 I read all of these in about a week (thanks, RI public library system!), which is either the right way to do it or very much the wrong way, because my brain is buzzing from all the Batman craziness Morrison hyperloaded into these. I mostly enjoyed the first two books, which both lead off with strong arcs (the title story for the former, The Club of Heroes for the latter), but kind of dipped a bit in quality toward the end. Not thay they were bad, they just couldn't hit the heights established in their respective beginnings.

R.I.P., on the other hand, was a bit of a chore for me to get through. Lots of interesting metaphor at play, and some truly inspired reconceptualizations of some of the more bizarre bits of Batman lore, but as a story, I never felt it really came together for me. Amidst all the crazy, in the end it still seemed like just another "push the hero past the breaking point and watch him try to bounce back story," and not even a storyteller with Morrison's chops can always breathe new life into every old trope. Everything felt rushed and awkwardly transitioned, like either he had problems fully expressing the ideas in his head on the page, or Tony Daniel had trouble translating them into art on the page, or even that maybe - just maybe - the story wasn't quite as clever as The Morrison himself thought. Whatever the reason, it didn't work for me, and brought the run to a bit of a thud.

I had similar problems with his X-Men and JLA runs. I thought the beginnings were all strong, but the endings disappointed. Maybe it's the result of editorial trying to rein him in? I've never noticed this sort of thing in his creator-owned work, All Star Superman, or even my favorite Morrison work of all, Animal Man. But of course, in all of those cases, he was pretty much given the keys to the kingdom, wasn't he? Working on Animal Man at a point when the highlight of the character's history was being in a group of also-rans actually called The Forgotten Heroes is a much different situation then working on one of the two or three most recognizable superheroes in the world at, well, any point ever, isn't it?

I can't say I was bored, though. It certainly made for compelling reading, so there's that. So by all means read it if you haven't yet. Read all of them, and be prepared to enjoy the hell out of certain parts. I mean, there's Ninja Man-Bats, a club of international crimefighters "inspired" by Batman, and a fight centered around the creative placement of Pop Art word balloons. That's some great comic booking right there. And Alex Ross covers where Batman doesn't look like a painting of some embarrassed neighbor or mailman Ross conned into posing for him. That has to count for something, right?
at June 24, 2009
Labels: Batman, comics, The List
Newer Post Older Post Home