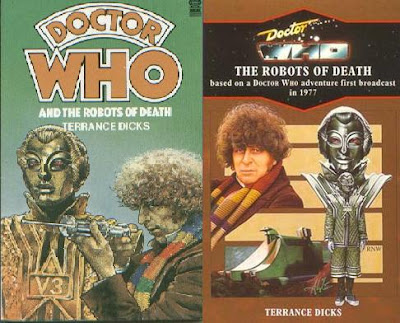 The Plot: The Doctor and Leela materialize on an enormous desert mining craft (it looks a bit like the Jawa sandcrawler in Star Wars) run by a group of surprisingly upper class workers and their disturbingly even-keeled art deco robots. As is usually the case, the murders start almost immediately after the Doctor's arrival, so of course he and Leela are considered the chief suspects and apprehended. The Doctor suggests that maybe the robots have something to do with the rapid decrease in population, but the crew - obviously unaware of the story's title - insist that's impossible, since with any decent post-Asimov bot, harming people is counter to their programming. However, the robots and their bizarre master are quickly pointing out the flaws in that particular argument.

The Thoughts: This could have been just another "base under siege" story, like any number of Who stories before and after it. "The Robots of Death" works on an entirely different level, though, as a rather gripping murder mystery story, an Agatha Christie novel with funny hats and a lot of eye make-up. It's a very well-made whodunnit, full of high class people with secrets to hide, a number of convincing attempts to throw suspicion on to others, some surprising plot twists, and killers who leave a calling card of sorts with the victims. Swap out the house party for a mining excursion and what you've got is "And Then There Were None... IN OUTER SPAAAAAAAACE!" 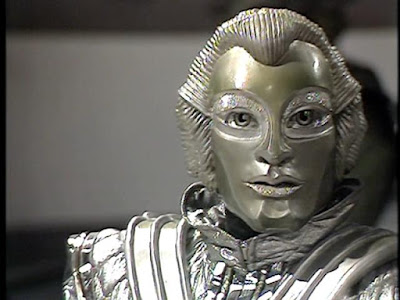 And it helps that the robots are creepy as hell. Their artful designs, the serene look of their immobile faces, the calm and emotionless tones of their voices... this lot ventures well into "uncanny valley" territory. The more helpful and human-like they seem, the more terrifying they become, an idea that's even given a fair amount of play within the script, the fear of robots becoming a bit of a plot point later on. The aluminum foil shoes and glowy red eyes of the "infected" models do diminish the terror a bit, I must admit, but they're effective overall. I can definitely understand why British children of the 70s would want to scramble behind their sofas in this case, and it's easy to see why they're still so well remembered by fandom despite being one-off monsters. The production designers did a great job with these guys.

(And there's lots of other fantastic design elements at play, too, that really give you a feeling of the sort of world these people inhabit when they're not off getting killed on a mining trip. The lavish rooms, the ornate outfits, even simple things like computer consoles and the Laserson Probe logo... wonderful flourishes all. But let's be honest here - we're really only interested in the robots, right?) 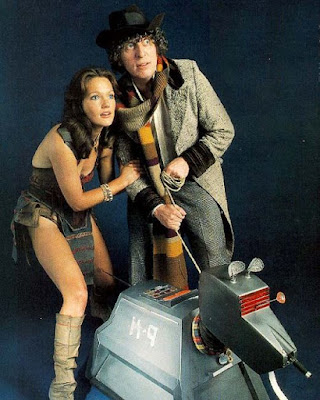 Baker plays the detective role well here in his usual "equal parts surly and friendly, egotistical and caring" style, solving the problem at hand while alternatingly alienating the crew and slowly gaining their trust. It's a very Holmesian outing for the Doctor, all the more appropriate when you consider that in the next story, "The Talons of Weng-Chiang," he more or less is Sherlock Holmes. Jameson, though, could have played up the "fish out of water" aspect of Leela a bit more. The Doctor has just whisked her away from the tribal warrior woman life she knew and now she finds herself on a far distant planet dealing with high technology and mechanical men (as she calls the robots). Maybe a hint more culture shock in there would've been nice? She does have a couple of nice moments, though, as she discovers she can't solve every problem with her knife, one robot fight being particularly memorable ("Okay, now you're just showing off.") But bear in mind I've never been a big Leela fan. I know I'm in the minority there, but coming in after Sarah Jane and before the Romanas, well, she has a lot to live up to, you know? She has her moments as a character (particularly in "Talons of Weng Chiang"), but not a lot of them here, I'm afraid.

Overall: What could've been a fairly typical Doctor Who story is elevated into something really special thanks to clever writing and design. Worth checking out if haven't seen much of Tom Baker's time as the Doctor, and worth re-watching if you have.
at June 22, 2009
Labels: Doctor Who, How's Who, TV