Quick thoughts about "Hulk Vs." 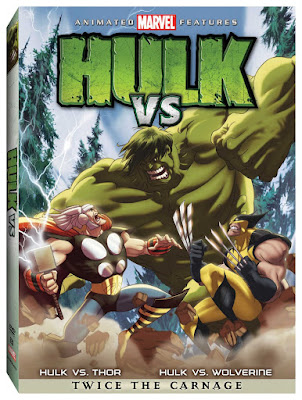 Finally had a chance to see the Hulk Vs. animated thing the other day, and I have to say that I really enjoyed how wonderfully, well, unsubtle it was. It certainly delivers what the title promises: the Hulk fighting people. There's a little bit of story in each of the segments, but it mostly that just exists to set up the hittin'. What was Bruce Banner doing before Loki whisks him off to Asgard, or before he has to fend off the attacks of Weapon X folks up in Canada? Who the hell cares? Hulk smash! And while I usually don't like it when they substitute action sequences for actual plot, that was never an issue here because of, again, that title. You stick "Vs." in a title, I want to see some fights. Like in, say, Godzilla Vs. Megalon... we don't want to see that annoying kid or Rex Dart, Eskimo Spy. We want to see Godzilla Vs. Megalon, so make with the throwdown, already!

One thing struck me as weird, though... the Hulk isn't really the main character in either segment. The real stars of the individual episodes are Thor and Wolverine. Hulk's mostly just the thing that sets the plot in motion... more MacGuffin than man or monster. I guess I can see why he gets top billing, seeing as he's arguably more famous than either of the others (though that's debatable given Wolverine's recognition factor these days), but it's just a little odd.

But that quibble aside, this was pretty decent. Good voice acting, lots of fun guest appearances (when does Volstagg get his own cartoon?), and probably the best animation of any of these Marvel direct-to-DVD things to date. Worth a watch, says I.