If you're in the Portland, OR, area, you should head over to Floating World Comics and check out their Full of Pryde exhibit, a Kitty Pryde tribute show they're holding as a fundraiser for the Oregon Hemophilia Treatment Center. The Kitty-centric work of over 70 artists will be on display, including Bryan Lee O’Malley, Farel Dalrymple, Jeffrey Brown, Tom Neely, and Corey Lewis among others.

If you're not in the Portland, OR, area, well, you can check out the art on the blog and even make a Paypal donation you're so inclined.

This one from Tom Neely is probably my favorite: 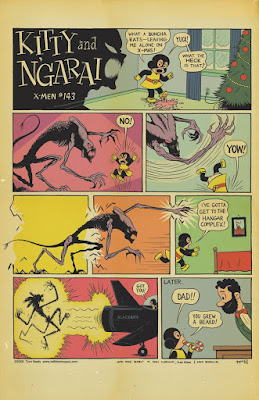 Looking for some cheap original art? Tony Fleecs (In My Lifetime, Tell Them Johnny Wadd Was Here, Postcards, etc.) is gonna hook you up. 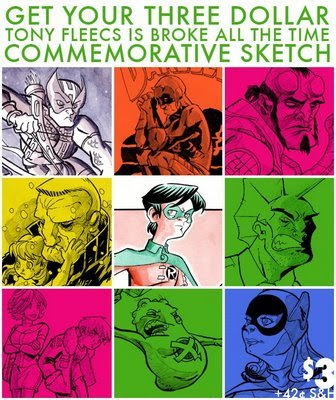 $3 (+ 42 cents for shipping per piece) gets you a 3 x 5 sketch card of any character you want rendered in at least pen & ink (and "probably also ink washed or colored pencil or markered over top"). You can order as many as you like, one character per card (though he has done a few so far that are linked cards of related characters). More info and samples can be found at his blog.


I'm sure everyone who cares has already heard, but the other day the DC blog posted a teaser image of a bronze-skinned adventurer type that could only be Doc Savage. And then an expanded version image hit Newsarama: 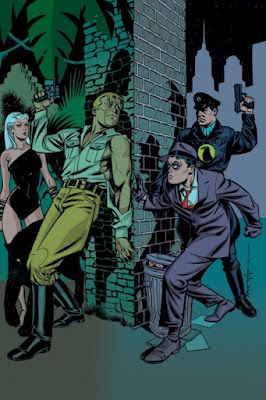 Now, I haven't read a Doc Savage novel or comic book in years, but Doc meeting the Spirit, with Blackhawk and Rima the Jungle Girl along for the ride? Sold. I'm not made of stone here, people. Wonder if this will lead into a new Doc Savage series the way the Spirit's team-up with Batman led into his?
at May 07, 2009
Labels: Art, comics, Doc Savage, Kitty Pryde, The Spirit