Why yes, he is OUTRAGEOUS!

The kiddo and I have both been loving the new Batman: The Brave and the Bold show on Cartoon Network. I love how fun and anything-goes the stories can be (Batman's in the old West to save Jonah Hex... how'd he get there? Who cares?!?), and that it's easily accessible for people unfamiliar with DC history, but with lots of Easter eggs tossed in for longtime fans, too (and not just comics fans, either; for instance, didja catch the Doctor Who joke in the Deadman episode?). And the characterization has just been top notch, from the pared-down-to-basics (but perhaps more capable than ever) Batman himself all the way down to folks with the briefest cameos.

But let's be honest here. The breakout character of the show is this guy right here: 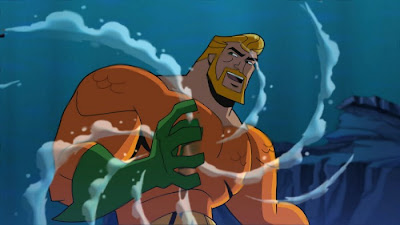 And I say, about damn time!

Obviously, it's hip to bash Aquaman. Look no further than stand-up comedy... "Aquaman can only talk to fish" jokes are possibly only second in most comics' repertoires to complaints about airline food. But clearly the guy had more than that going for him, since of all of DC's superhero characters created in the 40s, he was only one of 4 or 5 to be continuously published in that gap between the Golden and Silver Ages when the supers were out of vogue. So that's him, Superman, Batman, Wonder Woman, and maybe Green Arrow (not sure on him... can someone back me up?). Pretty good company for such a lame-o, huh?

And when Filmation did their DC cartoons in the 60s, which 3 guys headlined their own series? Superman, Batman, and Aquaman. Flash, Green Lantern, Hawkman, Atom, the Teen Titans, and even the Justice League? They were just the back-up acts. And though they're dated now, those Aquaman cartoons were cool. Aquaman, Aqualad, and Mera fending off some sort of new invasion every episode, riding seahorses, throwing projectiles of solid water (no, not ice), all while being narrated by Ted Knight... what's not to love there?

When Dorian asked "What makes people think Aquaman is lame?" a little while back, most people (myself included) commented that the problem really started with the Super Friends, who, let's face it, didn't do a whole hell of a lot underwater. Mostly, Aquaman was the guy who rode shotgun in Wonder Woman's plane and asked "What should we do now, Superman?" (I suppose Black Manta was just as poorly used over in the Legion of Doom, but at least he had that cool voice going for him, and their headquarters was actually under water some of the time, so maybe he doubled as the LoD maintenance guy?). Obviously, spending 10 years playing second fiddle to yahoos like Samurai or El Dorado would take its toll on anyone's credibility. And since far more people watch the cartoons than read the comics*, that credibility suffered across the board, and everyone started to get it into their heads that Aquaman = teh suck.

And as we all know, they tried to fight this image in the comics for years. New costumes, darker attitudes, bad-ass hook hand, mystical reimaginings, and even recasting the dude altogether, but none of it really seemed to work. But I think if anyone can actually succeed in turning this around, it's the B: B&tB folks. Like the other guest stars featured, they've stripped down the character to the essentials that people are going to recognize (orange shirt, green pants, lives underwater, rides a big ol' seahorse) and brought in a popular element from a previous cartoon (he can create solid water objects - still not ice - to use as weapons). But they've taken things a step further by actively attempting to counteract his Super Friends persona... whereas Aquaman had very little personality on that show, on this one he is nothing but personality. Brash, boastful, overconfident, and always spoiling for a fight, but still the sort of guy you're gonna want at your back when the chips are down, and probably the first to buy a round for everyone (maybe even his opponents) after the brawl.

It's much different than any other take on the character before, probably closer to Marvel's take on Hercules than what we tend to think of as Aquaman. And at first, with his personality coming on so strongly, I couldn't help but wonder if they were overcompensating. But by the end of that first episode he appeared in, I was won over, and the later appearance where he teams up with the Atom to fight viral invaders in Batman's body Fantastic Voyage-style is easily my favorite of the series thus far (plus, bonus points to the producers for using the Ryan Choi version of the Atom; and lest we forget, noble Platelet!). 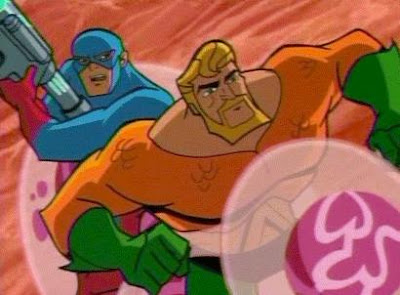 And this week, we get to see him again as he teams up with Batman and Adam Strange... there's no way that can't be awesome, people.

So it's taken a long time, but I'm hopeful that his appearances on Brave and the Bold will finally turn things around for good ol' Aquaman. If nothing else, the fact that the writers keep bringing him back show that at least they like the guy. And every now and then, good ideas and enthusiasm from the animation side of Warner Brothers do make their way into the DC Comics end of the pool; maybe this will be one of those rare occasions. And while I'm not the megafan that, say, Laura is, I did spend several months around the age of 4 actually introducing myself to new people as Aquaman, so I've always had something invested in the guy. You want to see a namesake succeed, you know?

* Too bad more people weren't reading the comics, too, since at the time I was watching Super Friends, I was also buying Adventure Comics when I'd find issues at the corner store specifically for the Aquaman stories, 'roundabout the time he was protecting the city of New Venice. Great stuff. Throw in Plastic Man and the Ditko Starman stuff, and that was a great book! But I digress.)
at March 11, 2009
Labels: Aquaman, Batman, cartoons, comics, DC