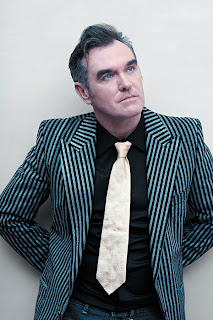 So Erin and I went to see Morrissey in concert on Saturday night at MGM Grand at Foxwoods in Mashantucket, CT (and if you've never been to MGM or to Foxwoods proper, they're literally out in the sticks... you drive through pleasantly ruralish Connecticut and then suddenly GIANT CASINOS AS IF FROM NOWHERE!!!). Now, I wouldn't consider myself a big Morrissey fan, though I do like several Smiths songs and some of his solo tracks, not that I remember the names of more than 3 or 4 of these. But I bought the tickets for Erin back on Valentine's Day, so I gladly went in the name of Awesome Husbandhood, and also because, come on, it's Morrissey. Given how flamboyantly, well, Morrssenian he is, I figure the dude had to put on a good show.

And he did. But Erin's better suited to describe the show itself, so I'm trying to coax her to write about it so I can post it here like I did with her Watchmen review (though I do want to say I was surprised and happy to actually hear him drop a few Smiths tunes into the set - This Charming Man, How Soon Is Now?, and Ask Me). I am, however, going to tell you about The Encore That Wasn't.

So the show ends, Moz and his band take their bows, and wander off the stage. The crowd's cheering, and the instrument techs come out to prep the gear for the inevitable return to stage. Sure enough, they come back, get all ready to play... and the Morrissey mumbles something about the poetry having ended, the electricity having gone out of the room, thank you and good night. He wanders off, the band lagging a bit behind (as if they weren't quite sure what just happened), and then house lights and music come up.

And we the audience... just kinda sat there. Eventually a few scattered boos were shouted, but generally the reaction was more along the lines of "Yeahbutwha... ?"

1. Someone in the front row said something to Morrissey which pissed him off and caused him to leave. Given that he handed the mic to the audience several times so that they could shower him with praise, this seems unlikely.

2. The power literally did leave the room just before the encore, making it impossible to play. Possible, maybe even probable, but it would've been limited solely to the stage equipment, then, because everything else was fine.

I tend to lean toward 3, if only because it supports my own beliefs about the man. Several times made fun of the fact that he was playing a casino in the middle of hunting country, so I think it's entirely conceivable that he had just had enough. And this is Morrissey we're talking about here... he's all about the showmanship, and leaving the crowd wanting more - literally, and maybe a bit angrily in places here - is what showmanship is all about. Either way, I admired that he had the balls to do this without explanation or apology. Encore or Noncore, we got exactly the Morrissey we were expecting, and therefore it was money well-spent.
at March 30, 2009
Labels: Morrissey, music, Smiths