In which I discover that such a thing as "a good Ghost Rider comic book" can exist. 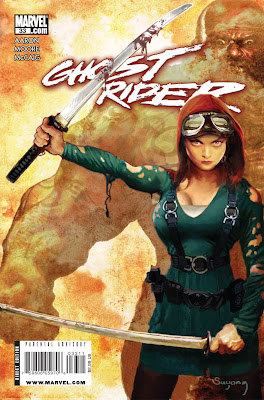 So I know all sorts of people online have been raving about how good Jason Aaron's Ghost Rider has been. But even when it came from people whose opinions I generally respect, well, come on... it's Ghost Rider. I always kind of figured "best Ghost Rider run ever" was akin to be named "world's shortest giant." But I was promised The Awesome with issue #33 from just the cameos alone, and I have to admit that I was wrong. The Awesome was indeed delivered, and if Aaron's work on the book is always like this, I may need to reconsider my stance on the very idea of Ghost Rider. And possibly giants. What made it so good? Well, let's bullet point this.

Long story short (WAY too late) there's a lot to like about this issue, and maybe even this iteration of the Ghost Rider book as a whole. Not the sort of thing I'm going to collect monthly, but I do think I'll give the first trade a shot and see where things go from there.