He lives without fear, but also without tact, common sense, basic decency, etc.

The first Green Lantern comic I ever read was the mini-comic that came with his Super Powers action figure. I liked it, and the figure, so I decided I'd get a real GL comic when the first opportunity arose. I found one a bit later at a corner store in Monson, Maine, on the way home from visiting my aunt and uncle at their camp. The issue? 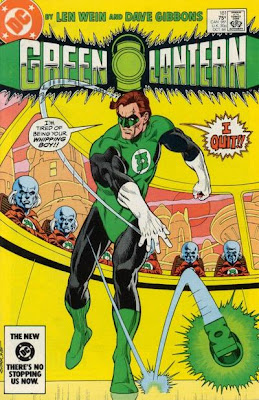 This one. The one where Hal Jordan up and quits the GL Corps to be with Carol Ferris. This set the stage for my relationship with this version of the character for years to come. I got all excited for a character thanks to a cool toy and his appearances on Superfriends, and the first time I buy his comic book, Hal stops being Green Lantern (I was 8, I had no idea this wouldn't be permanent), and for a girl, no less (again, I was 8). How un-Superfriendsy. I followed along off and on to see how DC would deal with this, so by default, John Stewart became my Green Lantern right off the bat.

Hal eventually came back, of course, but the damage had been done. Next time I read an issue of Gl that featured Hal, the book had become The Green Lantern Corps, and featured a variety of other Lanterns hanging out with Hal and John, most of whom were more interesting. Also, Hal started a relationship with Arisia, the alien female GL who had had a long-standing crush on him, even though she was underage. But it was "okay," because she used her ring's power to age her physically, never mind that mentally she was still 14. So that was pretty gross.

I caught a few of his appearances in Action Comics Weekly, where he was jobless and mooching off of John and Katma Tui (who were married by this point). His old buddy Green Arrow showed up at one point to tell Hal to "get a life." Oh, and Hal's ex ended up killing Katma. So he sleeps on your couch, eats your food, probably doesn't kick in for the rent, and ends up getting your spouse killed. That's gotta make him one of the 10 worst houseguests ever.

I seem to recall there was an annual where Hal managed to get John imprisoned in a South African jail, but I might be misremembering that one.

In the series that began in the early 90s, he's basically a homeless drifter, and a town he visits gets whisked off to Oa by that Guardian who went mad (before going mad was the thing to do for the Guardians). Hard not to attribute that to him, too.

And, of course, after Coast City was destroyed by Mongul and Cyborg Superman, Hal goes nuts, murders the entire GL Corps, becomes Parallax, and attempts to restructure all of time to his liking. But that's "okay," because as we found out a few years ago, he was just being possessed by a yellow alien bug fear god or something.

So while I've never considered myself a huge Green Lantern fan*, I've clearly read a number of GL comics through the years. And in that time, what's the most positive trait I've seen from Hal Jordan's resume? Quitter. Compared to Twisted Aimless Genocidal Pedophile, being a quitter ain't half bad.**


* Well, except in the 90s when Kyle Rayner took over... I followed the book pretty regularly for a good 5 or 6 years during that era.
** To be fair, I did like the version of Hal that appeared in Darwyn Cooke's DC: The New Frontier. Why can't more people write stories about that guy?
at February 17, 2009
Labels: comics, Green Lantern