The Once and Future Legionnaire 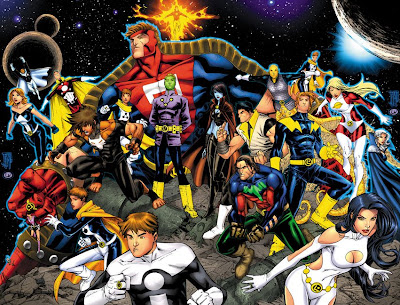 I'll be sad to see the Jim Shooter / Francis Manapul version of the Legion of Super-Heroes come to an end. I've really been enjoying it, and think it's by far the best take of all on the "Threeboot" Legion. While I appreciated Mark Waid & Barry Kitson's "Legion as youth movement" idea (or as I've called it here before, the "Wild in the Streets Legion"), they were a little too heavyhanded with it. Tony Bedard, too. Shooter, shockingly, took a somewhat subtler approach. The hallmarks of Waid's take were all there - the Legion as a movement instead of just a team, the antagonistic relationship with the UP government, etc. - but they were folded into the framework of a more, I don't know, Legiony story, instead of being the story in and of itself. All in all, it's been a fun ride.

Superboy wasn't just a member of the Legion, he was their inspiration, the reason the group was founded in the first place. As was said on that Smallville episode last week, Kal-El's time as Superboy set an example that would be recalled over hundreds of years across a thousand worlds - the idea that a teenager from another planet could use his gifts to protect an entire civilization that wasn't even really his own. It's a pretty grand idea, really, and if you take it away, the Legion of Super-Heroes is just another run-of-the-mill super team. "Because the galaxy needs heroes" is no better a reason to team up than "because we can." Taking their cue from Superboy, though, and living by his example, that brings a sense of purpose to the party.

And clearly folks at DC realize this, since they've been trying different ways to insert some variation of the character, or at least his role, back into the Legion ever since Superboy got Byrned out of Superman's history in the mid-80s. You have the Pocket Universe Superboy and the retconning of Mon-El into the Superboy role as Valor as early efforts at filling the Inspiration role, and clearly, those just weren't the same, and ended up causing more problems than they solved. And then there's the attempts to at least stick some sort of Superboy into the ranks as a member, if not the driving force, in the forms of the 5 Year Gap's Kent Shakespeare and, Post-Zero Hour, the 90s clone Superboy (twice, kind of), but those never fit quite right, either. Again, they were only imitations of the original and couldn't really match up (not that they don't have their fans), and as such were only ever mere members, not guiding lights.

Much as I've liked some of the Legion stories told in the years since Superboy was removed from their history (I mean, come on, Legion Lost is fantastic!), I'm convinced that they're better off with him restored to his rightful place in their history and hierarchy. It's a damn shame that the current run has to be brushed under the carpet the way that is (presumably) happening, but there's an argument to made that it might be for the best in the long run.

But whatever comes next, I really hope they retain the services of Francis Manapul. I've loved how the book has looked this past year.
at January 22, 2009
Labels: comics, DC, Legion, Superboy