In which I attempt to go all Project Rooftop on the subject of Phoenix.

I had the X-Men on my mind the other day, partially because I had just read the entire Joss Whedon run on Astonishing X-Men a few days before, but also because that's just the sort of thing happens to me on any given Tuesday, and it occurred to me that the original Phoenix costume just might be one of the best superhero uniforms ever. 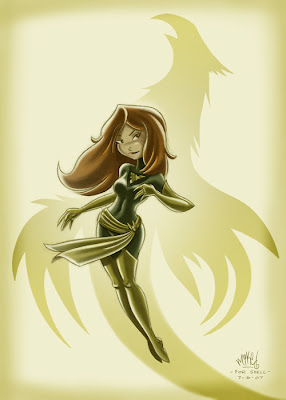 See? Even when drawn in a somewhat cartoony style (in this case, by Mike Maihack of Cowshell Graphics), it looks damn cool. A nice, uncluttered design. A simple yet still distinguishable logo. The sash that allows an artist to do all those cool little in-flight movements a cape would make without actually having to give her a cape (adding a cape to this outfit would make it look too Marvel Family... which is a great look for the Marvel Family, but not an X-Man; Storm excepted, X-Men look silly in capes).

And among female costumes, it truly stands out. Form-fitting, sure, but still beyond modest... even her neck is covered! It seems relatively practical, at least when the artist doesn't try and add heels to the boots. It's pretty much the anti-Wonder Woman uniform.

And perhaps most interesting, it shows the true iconic power of color. The green and yellow together is reassuring somehow, maybe even a bit calming, despite the power of the lady in question. But white out the eyes, add some flames, and turn that green blood red, and it's a whole new ballgame. 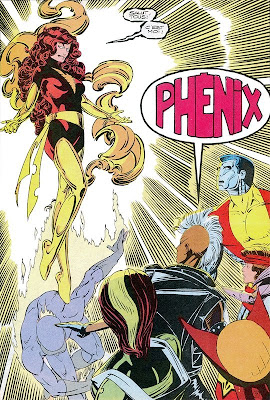 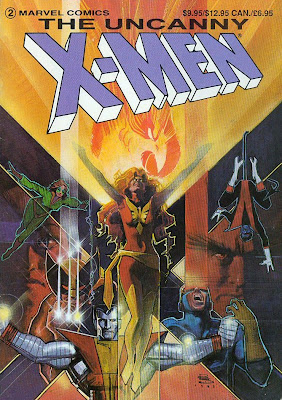 (I still say this is the only cover this collection should ever have.)
Even given his penchant for exposition above and beyond the call of duty, I find it funny that Chris Claremont had to go and name this incarnation Dark Phoenix, since it's so clear just looking at her that whatever's about to happen in her presence will be Not Good. And that's as much because of the costume as her demeanor or obvious power, so strong is visual cue provided by a fairly basic color change.

This is a Dave Cockrum design, yes? Even if I didn't already suspect it (given he was X-Men artist at the time of Phoenix's debut), he'd likely be my first guess. It's not only reminiscent of the designs he did for the Legion of Super-Heroes, but it has that same hallmark of his usual creations... generally basic in design though still quite snappy, has a quick symbolic summation of the character's name/power/theme (the last one was nothing new for superheroes, of course, but Diamond Dave had a real knack for it), and just about anyone can make it look really good. Sounds like a winner to me.
at December 10, 2008
Labels: comics, X-Men
Newer Post Older Post Home