Stop me if you've heard this one before... so there's this planet Krypton, right?

More DC title shake-up hoo-ha hit the intermanet while I was engrossed in my Thanksgiving Break Wii Marathon... Superman will be moving out of Action Comics (certainly temporarily, I'm sure), as will the creative team of Geoff Johns and Gary Frank. In the meantime, Johns and Frank will be doing a six-issue mini-series called Superman: Secret Origin, which will iron out the kinks of Superman's backstory post Identity/Infinite/Final Crisis and be considered the "definitive" Superman origin until, of course, it's not anymore.

As Barenaked Ladies once sang, It's All Been Done Before. Woo hoo hoo.

And yes, I realize that they're not going to be changing the basics, just fiddling with the in-between details the way comic book creators are wont to do from time to time, I still have to wonder how many more times you can strip mine that particular story - easily the most recognizable superhero origin ever, and probably more famous than the story Siegel and Shuster clearly borrowed from, that of Moses - without boring everyone. And I say this as the sort of person that's actually glad to see them restoring Superboy to the Legion of Super-Heroes... I don't need a whole story about it, just say "okay, that happened again, let's move on."

Come next year, I'll have seen Superman's origin officially "redefined" three times in my lifetime - Man of Steel, Birthright, and this thing. And considering the original version of the story went largely untouched from 1938 to 1986, that seems a bit much to me. Even if you don't read comic books, you know this story, or at least the basics. Hell, Grant Morrison and Frank Quitely were able to sum it up in 8 words and 4 panels: 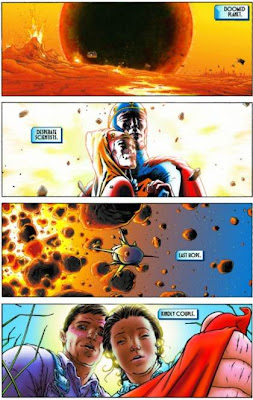 Do you really need any more than that?

This, more than anything, is what's bugging me about corporate comics these days. Stop dwelling on the old and give me something new.
at November 30, 2008
Labels: comics, Superman
Newer Post Older Post Home