Among other bits of wisdom information we learn in this interview with DC executive editor Dan DiDio comes the news that Blue Beetle, my favorite mainline DC Universe title of the past few years, is getting the ax. 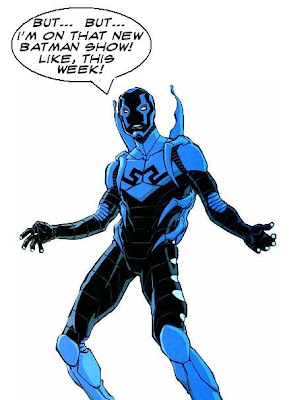 Yes, just days before the character is set to make his animated debut on Cartoon Network's new Batman: The Brave and the Bold series.

I get that sales numbers are way, way, way down past the point of probably no return, but still, seems like shit timing to me.

Oh well. It was a great book while it lasted - better under John Rogers than anyone else, but still - and I'll be sad to see it go, but with the end of this and Legion of Super-Heroes (killed during the team's 50th anniversary year, I remind you), that about wraps it up for the remaining DC monthly books I buy. So I suppose I could thank them for hastening me into the land of Waiting for the Trade, though I doubt I will.

I just hope the current creative team knew they'd be out of a job before they read the interview. Because if not... awkward.
at November 12, 2008
Labels: Blue Beetle, comics, DC