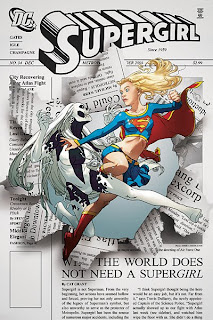 You know what? I absolutely *loved* Supergirl #34.

For one thing, it features, however briefly, the Silver Banshee. She's a lesser Superman villain, to be sure, but she's a favorite of mine. She was in the first of the "rebooted" Superman issues I ever read, Superman #17, so there's some nostalgia there. Also, she's from an island in-between Scotland and Ireland, and I therefore appreciate the way she represents both sides of my family's heritage. British Isle mutts represent!

But more importantly, it gives this oft-troubled version of good ol' Kara Zor-El something she's lacked ever since she was introduced (reintroduced?) - a distinct direction.

From her Jeph Loeb and Michael Turner beginnings in the Superman/Batman book, the current Supergirl seemed to have had one directive: make the fanboys hot. So she dressed in a belly shirt, went bad and leathered up, got a back tattoo, made out with a couple of different guys (one of whom I'm told was a doppelganger of cousin Kal, right? Ewww...), was supposed to have been sent to Earth with a dark secret agenda (though they'll never admit, a lot of guys fall for emo tendencies, too), and I think even smoked for an issue or so. And while this was nominally supposed to be her trying to find her way in the world while living under the expectations of both Superman and the world, I guess, most of it (certainly the bits I read) just came off as fan service.

The Supergirl that writer Sterling Gates gives us in this issue, though, is a breath of fresh air, but without completely revising everything that has come before. All those other stories still happened - Supergirl has made plenty of mistakes, and as we see, public opinion is not in favor as a result. She's trashed by Cat Grant on the front page of the Daily Planet. Folks at the baseball stadium are mad that her fight with Silver Banshee interrupted a tight 1-1 ballgame, and one of 'em lobs his soda at her head in anger. She wants to help, and she's certainly trying, but it's really not going well. So for the rest of the issue - the bulk of it, in fact - she talks with her family and friends about the best way to start fresh, and for once maybe join and better understand humanity instead of rushing headlong into situations she still can't quite grasp.

And this where the issue really sings, all these quiet moments - Superman bringing her coffee (complete with the little cardboard carrying tray), talking with the Titans, and having a heart-to-heart with Wonder Woman while helping her fight a gryphon (fun Harry Potter joke in that scene), and a long walk in the fields with Lana Lang, another character looking for a way to begin the next act of her life. In those pages, I think we get a better understanding of this character and her attempts to make her way in the world than we have in all of the past several years' worth of stories combined, and that Gates does so without negating any of them makes the feat all the more impressive. The man has taken lemons and made some truly outstanding lemonade here.

Artist Jamal Igle's contribution can't be downplayed, either. It's no secret that the Navel-Bearer of Steel has been subjected to some fairly... let's say To Catch a Predator-esque depictions in the past. Igle's Supergirl, however, is a lot more respectful, both to the character and the sensibilities of humankind. Kara's still idealized, to be certain - I mean, come on, she's Supergirl, she's supposed to be the picture of perfection - but a bit more realistic. She's not so waifish, doesn't have a weirdly extended torso, and is refreshingly unjailbaity. And the other characters come off well, too, each with the own unique looks, expressions, body language, and sense of style. No cookie-cutter folks here... looks like Igle's been doing his homework, and it pays off.

So, in short, Supergirl #34... maybe not the perfect comic book, but a damn good one, and if this wasn't proceeding directly into a crossover, I'd likely stick around. But who knows, maybe I will anyway.
at October 23, 2008
Labels: comics, DC, Supergirl