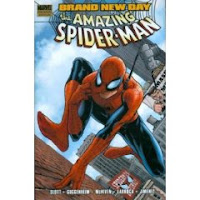 Spider-Man: Brand New Day Vol. 1 - At this point, I don't think anyone will disagree that the way Marvel unmarried Spider-Man was just about the most hamfisted reboot in comics history*. But the end result of that convoluted mess? Honestly kind of worth it. Seriously, people, these are some of the best Spider-Man comics to come down the pike in years; certainly since the high points of the early/mid 80s, if not before even then.
Marvel's fabled Spider-Man writing & editorial braintrust might not be writing anything particularly new or innovative (you've definitely seen a lot of the basics of these stories before, be it Peter Parker's money troubles, Spidey's problems with the law, mysterious new villains, etc.). And sometimes they try a little too hard to up the drama content - honestly, the travails of Peter Parker, both in and out of costume, in these six issues push him past being the Charlie Brown of the Marvel Universe and into being its Badluck Shleprock. But as the comic book equivalent of comfort food or that favorite sweatshirt, the sorts of things you go back to because you know exactly what you're gonna get and you know you'll like it, it's aces. The trade paperback of the second collection is already on my October Previews order.

Herbie Archives Vol. 1 - Honestly, I don't know what else I can say about this insane, wonderful book without repeating what just about every other comics blogger has said already (hell, Sims talked about it some more just yesterday). I just hope that these books from Dark Horse find the wide audience they deserve, so that as many people as possible can enjoy the insane genius that Ogden Whitney and Richard "Shane O'Shea" Hughes put down on just about every page. With any luck, these guys will be this year's Fletcher Hanks, a rediscovered comics sensation that people just can't stop thinking about (though as opposed to Hanks' work, the humor found in Whitney and O'Shea's work is intentional, which I think gives 'em a leg up).

* And considering some of the stuff DC has pulled with the Legion of Super-Heroes and Hawkman, to name two prominent examples, that's saying something.
at October 07, 2008
Labels: Herbie, Spider-Man, The Dig List