An empty Pod is a sad Pod. 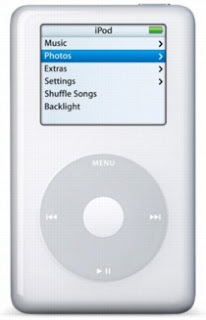 My iPod, Douglas (yes, named for late author and all-things-Apple enthusiast Douglas Adams), is about 3 years old (making it well-past retirement age in hardware years), and had a brush with certain doom the other day. It dropped to the floor, bounced off said floor, flew out of the protective case I had him in, and then bounced off said floor again. He then liked to alternate between showing the Sad iPod Icon, the Battery Icon, and the Folder Icon, and made a fun (read: not at all fun) clicking, whirring noise when I plugged into the computer. And iTunes wouldn't recognize it, so it suggested I try to restore factory settings, essentially wiping everything clean. It was painful, but I did it... and it didn't work.

Long story short (too late), I took it to the Apple Store, and the dude at the Genius Bar was able to get Douglas back up and running again - thankfully it was a cable that had come loose inside, and not the hard drive dying, since a new hard drive for a 4th gen iPod Photo is actually more expensive than a brand new iPod Touch these days. Ouchie.

So he works again. At least for now. Which is good. But he's now completely empty. Which is painful. I mean, yeah, I can just reload everything, and with so much stuff I rarely listened to, it was probably the housecleaning I needed, but still... an completely empty iPod to refill is as scary (well, not scary, maybe annoying?) a proposition as it is am exciting one.

Plus, there's all those songs I need to re-find, buried on CDRs burned back when we were transferring files from the old computer, long-since packed away before the move and not seen since. Yeah, that's gonna be a pain in the ass.
at October 20, 2008
Labels: life, music, tech
Newer Post Older Post Home