I don't usually like to do more than one Pretty Sketchy post a week, nor do I like to put up sketches as soon as I get 'em, but I thought this was awesome enough to break both rules: 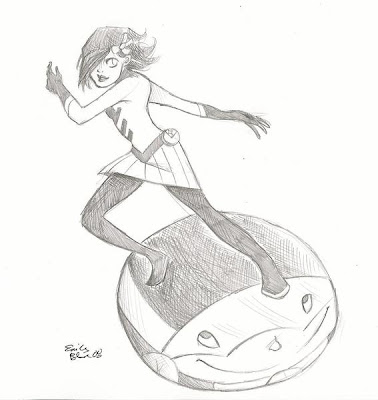 So after buying Emily Block's 24 hour comic Marina, (which I typed about here), I wrote to let her know how much I enjoyed it, and I mentioned that if she ever did commission sketches, I'd love to get something from her for the Legion of Super-Heroes sketch book/collection I was starting. She said that she was at least passingly familiar with the cartoon and was willing to give it a shot, and I figured she'd do an awesome job with my two favorite characters from that particular version of the Legion, Shrinking Violet and Bouncing Boy. And I was right... Vi and Bouncy look fantastic. She knocked this one out of the park as far as I'm concerned. Thanks, Emily!
at August 07, 2008
Labels: cartoons, DC, Legion, Pretty Sketchy