Right. It's about to get SPOILERY around here. So if you haven't seen the final two episodes of Doctor Who season 4 and you plan to, you might wanna skip this one. Go look at the Throwing Muses and Belly videos I posted yesterday, for instance. 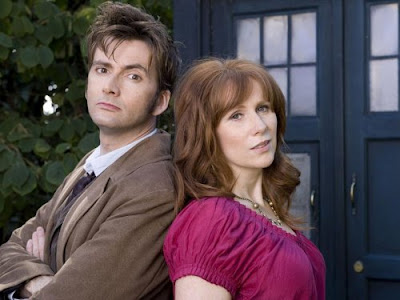 Right... the two part finale, "The Stolen Earth" and "Journey's End." Because De wanted to hear some of my thoughts, here they are. I'm gonna bullet point 'em, though, because it's early and I haven't been visited by the Coffee Fairy yet.

In short, it had a few moments of weirdness, but on the whole, a good ending to what was, for my money, the best overall season so far. There were no hugely stand-outtingly excellent episodes like "Blink," "The Girl in the Fireplace," or "The Empty Child/The Doctor Dances" this seasons, but neither Erin nor myself thought there were any real "Daleks in Manhattan" style clunkers, either. Even the not-as-great episodes were still quite good in some way, shape, or form, we thought. And how often can you say that?
at August 05, 2008
Labels: Doctor Who, TV