Doctor Who and the Ten from Target

Not long after discovering Doctor Who on television, I stumbled across the novelizations that were published by Target in the 70s and 80s, and I was instantly hooked. Mostly straight adaptations of the original televised stories (along with a few that adapted radio scripts, unproduced episodes, and an original story or two focusing on specific companions), they were a great way to experience stories I hadn't seen yet, wouldn't see again for a long time to come*, or maybe even wouldn't see at all, thanks to Auntie Beeb trashing so many First and Second Doctor stories to "save space" in their vaults. And while they weren't always good in the classic sense of the word, they usually made for fun, junky reading, especially in the summers. And like any good junk reading series - your romances, your true crime, your men's adventure, what have you - a lot of the books had some great, memorable covers**. Here are ten of my favorites, rediscovered with the help of this awesome website***. 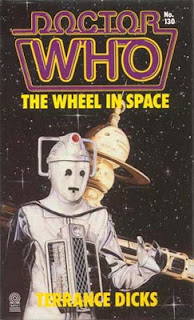 Admittedly, this one is pretty bland, but I love the look of the old school Cyberman here, and the cover promises exactly what's in the book... Cybermen attacking a space station. And that's what I'm the market for most days, so sold. 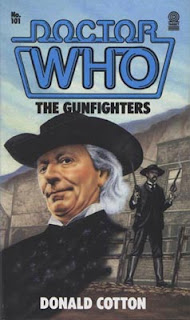 I've never been the biggest fan of William Hartnell's tenure as the Doctor. Sure, I understand his significance, him being the original Doctor and all, but still, I always found his stories kinda boring. That said, Cowboy William Hartnell looks surprisingly bad ass here. 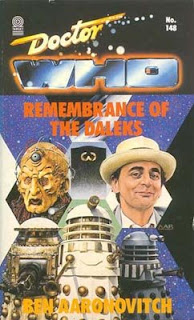 I hate that the McCoy era logo cuts off the cover image, since the artwork here is particularly great, and a fantastic summation of everything you need to know about the story to draw you in... there's the Doctor, there are Daleks, and they're fighting over a bizarre, coffin-like artifact. Too bad it spoils the eventual Davros reveal, though. 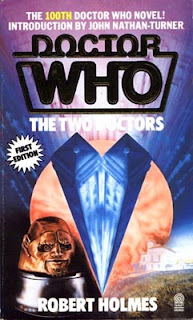 Love the imagery created by the mirror image TARDISes in flight. Love that a usually silly-looking Sontaran actually seems kinda menacing. Love that they resisted the urge to include the Androgum DNA-enhanced Patrick Troughton, since damn, that part of the story is just plain dumb. 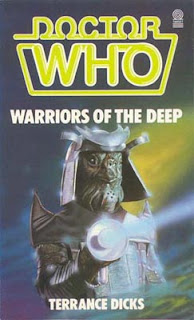 Another plain cover, but as a little kid, I found Samurai Ray Gun Turtle Man here quite transfixing. 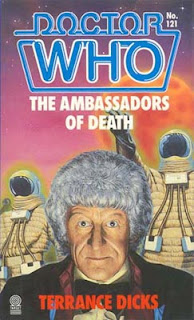 Maybe it's because the middle act of E.T. scared the hell out of me at an early age, but menacing dudes in space suit-type gear still give me the chills****, so this one sticks with me, even if Jon Pertwee does look disturbingly like Bea Arthur here. 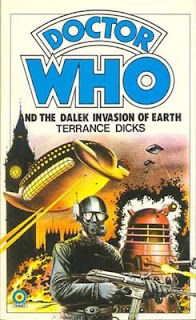 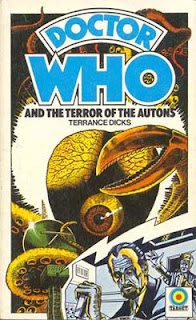 Two of the earlier Target covers, I think, and I lump them together because I love the B-movie poster aspect of them both. I'd love to have either of these as posters, in fact, so if someone knows of a way to make that happen, hook me up! 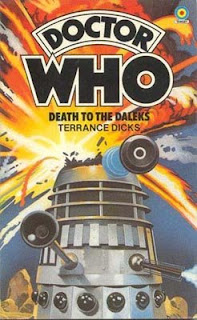 And this cover actually was made into a poster, IIRC. It's a simple enough concept, really - Dalek head go splodey - but the execution is very eye-catching. 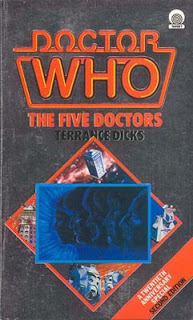 The novelization of The Five Doctors originally had a reflective silver cover, which is why it looks so dark here (that sort of thing never scans well), and I've yet to see a copy since (or, come to think of it, even at the time), that wasn't scuffed from people just looking at it the wrong way. But even with that limitation, it certainly stood out on the shelf, and the design manages to capture both the feel of the history of the show and some of the more fun aspects of the story itself. The mostly-silhouetted profiles are a fantastic visual, too, and I especially dig the little half-wisp of a profile just beyond Peter Davison that gives a hint of Doctors to come.

* The PBS station in Bangor tended to re-run Who in order (unless new episodes came in, which they always rushed to air, thankfully), so if you wanted to see, say, a Peter Davison episode and they were still in early William Hartnell, you had a very long wait ahead of you.

** At least until Target reissued the line in the late 80s / early 90s with new covers and a uniform trade dress. I can understand the practical business reasons for doing this, but the later editions always looked so bland to me.

*** Just the Target books on that site, though... none of the reissues that were published by, I think, Pinnacle Books.

**** When I used to work in a video store, I always had to hurry past our copy of George Romero's The Crazies, as the dude on the cover in the radiation suit freaked me right the hell out.
at July 06, 2008
Labels: books, Doctor Who, TV