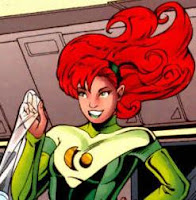 #4. Kinetix - While the Legion of Super-Heroes has never had a shortage of uniquely misguided characters in any of it's iterations, Zoe here might be top of the heap in that regard (no small feat). Like any good super villain, Kinetix's entire career was based upon the acquisition of as much power as she could possibly acquire. Except she was a super hero, and she genuinely wanted to use that power to help people, not conquer them, which raises the question do good intentions justify questionable actions?

#3. Tanner Clark - Aunt of Amelia McBride, title character of Amelia Rules!, and a mostly retired indie rock star. After Amelia's parents divorced, she opened her home to Amelia and her mom until they could get on their feet. She puts up with Amelia's crazy friends, always has a situation-specific song lyric to quote in times of trouble, and is pretty much the only adult in Amelia's life who gives it to her straight. In other words, Tanner is the coolest grown-up ever. 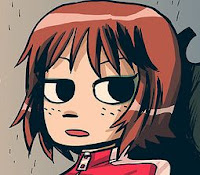 #2. Kim Pine - Drummer for Sex Bob-omb, the coolest band in all of comicdom. Not only Scott Pilgrim's friend and frequent confidante, but also his high school girlfriend, so you have to figure her patience levels are legendary. But at the same time, she doesn't take shit from anyone, especially Scott, and in the last book, famously told Scott she'd punch his life in the face if his life actually had a face. She's the quiet, reserved presence in the background of a lot of scenes, but I've had a strong feeling since Book 1 that she's going to be Very Important by the time the Scott Pilgrim series ends. Or maybe I'm just hoping that because she's really cool. 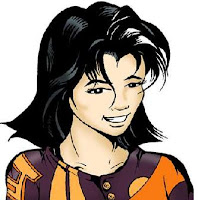 #1. Loo Lay Th'eng - Loo, the main character from Paul Sizer's Little White Mouse, isn't just awesome because she's super brilliant, incredibly resourceful, or determined to succeed in the face of astounding adversity. Though all of those things help, of course. But she spends months trapped as the only living person on a mining station with only two small robots, a larger android containing the programmed memory of her dead sister, and the ghost of the station's architect to keep her company, and she doesn't let that stop her from having a good time. A situation that would crush most folks' spirits, and she makes a game out of stuff like avoiding the security drones that would kill her on sight. What a fabulously fun and complex young woman Loo is.
at June 22, 2008
Labels: comics