Pretty Sketchy - One for the Kiddo 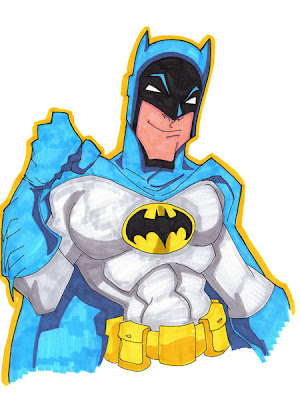 A very Superfriends / Adam West sort of take on Batman, drawn for my son Liam by Andrew Charipar and picked up for me at this year's New York Comic Con by my friend Dan (since everyone in my house spent the month of April sicker than hell and we couldn't go ourselves). I've been a fan of Drew's for awhile, and I loved the Mary Marvel he had drawn for me at last year's NYCC, so I jumped at the chance for more when he posted a sketch pre-order thread over on the Comic Geek Speak forums. Though he claims to have a hard time with Batman, he turned out exactly the sort of piece for Liam I wanted. And better still, Liam just *loves* it, and it's framed & hung in a place of honor on his bedroom wall.

Drew also did a fantastic sketch of my favorite Marvel Team-Up villain, the White Rabbit, for me, but that'll have to wait for a future Pretty Sketchy installment.
at June 03, 2008
Labels: Batman, family, Pretty Sketchy