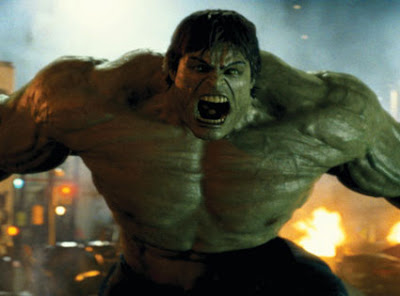 You know, The Incredible Hulk wasn't that bad. Admittedly I had pretty low expectations going in, due to some weak-looking commercials and the fact that the only Hulk stories I've ever really enjoyed involved doing some pretty un-Hulk-like things (smart Hulk leading the Pantheon, Hulk as Space Spartacus, etc.), but still, this was a pretty entertaining. Good performances all around, a decent (if by-the-numbers) script that hits all the right beats in all the right places while drawing from both the comics and the TV series, and a couple of big, messy fight scenes where things get blowed up real good. Oh, and best of all, like Iron Man, they apply the comic book fandom references with a subtle hand... they're there, but they don't excessively call attention to them. I can dig it.

And it's surprisingly democratic, too. There's no overt references to Ang Lee's painful Hulk from a few years back, but they don't really go out of the way to say it isn't a sequel, either, so it's really up to the individual audience members to decide if this is a continuation or an entirely new animal. A level-headed approach to potentially dicey issue. Nice!

So if you grade Iron Man an A (and I would), The Incredible Hulk pulls a B-, though could probably talk it's way up to a B pretty easily. It's a fun couple of hours at the movies.
at June 24, 2008
Labels: comics, hulk, movies