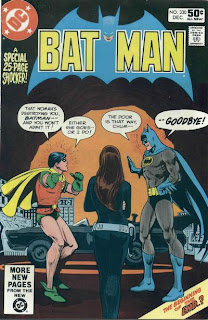 The book: Batman #330
Bought at: Fairmount Market, Bangor, ME

In all likelihood, Batman #330 was not my first comic book ever, but whenever I think back to my earliest comics, it's always the one that pops into my head before any of the others, so I figure it's the best place to start. If there was a single moment where my little brain went "Comics, yes," then this was probably it.

At this point in time, I was already a big Batman fan, thanks to Superfriends, the Filmation cartoons (both the reruns of the 60s toon and the newer episodes with Bat-Mite then airing on Saturday mornings), and most especially the 60s live action Adam West show. And of course, that Batman comics at this time resembled those TV programs in almost no way whatsoever. Robin was in college, Batman was living in the Wayne Enterprises building penthouse, there was no Batphone, and none of the equipment in the cave was labeled at all.

But look at that cover... it perfectly reflects the Batman I knew. The cave and the Batmobile look the same, Batman and Robin are both there, there's a lady on the cover who I thought at the time was a Julie Newmar-ish Catwoman, and Batman is even calling Robin "chum." It all looked right to me. So inevitably, I was a little confused when reading the story inside with my parents. Right off the bat, the lady on the cover wasn't Catwoman, but some woman named Talia. Didn't know who she was, nor did I know anything about her dad, but Batman seemed to like her, so even if Robin didn't, well, I guess she had to be okay (even if I was confused as to why Batman would rather hang out with some icky girl instead of his youthful ward, Dick Grayson).

Adding to the confusion was that one of the villains of the issue (and there are several, as a condemned man has put a $10 million bounty on Batman's head) was a cowboy, so I just assumed it was Shame, the cowboy villain Cliff Robertson played on the TV series, though a little more bloodthirsty and quick with the knives. But nope, it was another guy altogether named - wait for it - The Cowboy. Go figure.

So what I got ended up not resembling that Batman I knew very much at all. But somehow, it didn't matter all that much. Maybe the subtle differences between the different TV shows made it easier to accept, or maybe it just didn't matter because I thought, hey, Batman is Batman, and Batman anything is good. This theory, of course, would be disproved many times over throughout the years, but when you're 4, it's indisputable logic.

Quasi-interesting side note: This issue contains the first superhero Hostess ad I can remember seeing, featuring Wonder Woman. I was excited by the prospect of having a whole other comic to read, but was confused when Wonder Woman beat her enemy with the power of Hostess products. I distinctly remember my older sister having to tell me that it was an ad, and no, superheroes did not typically employ junk food when stopping crime.

Even less interesting side note that I'm going to share anyway: This is, for my money, the greatest Batman logo ever. I must have traced this a few hundred times as a little kid.
at May 15, 2008
Labels: Batman, comics, Getting Hooked