Does whatever an iron can. 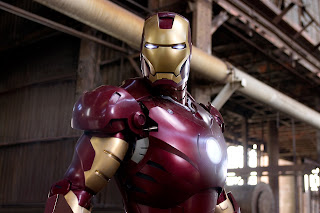 (Might be SPOILERY if you haven't seen Iron Man yet. Read at your own risk.)
Okay, Iron Man has been out a few weeks at this point, and most of the rest of the online community has had their say about it already, so there's really nothing new I can bring to the party, but having finally seen it this past weekend, I do want to say this.

Seriously, there's a lot Hollywood could learn about comic book adaptations from this movie. And the most important thing, I think, is this - don't worry about making a good superhero movie. Make a good movie that happens to be about a superhero. It may sound like semantics, but I think it's actually a very crucial distinction. Special effects are fine and good, but without a good script, a talented cast, and competent direction, all you have is just a video game. A video game we don't even get to play. Who wants that? Give us a good movie, and you'll bring in the comic book fans and the normal people alike.

And speaking of fans, there's a lesson to be learned from Jon Favreau & Co. about including fandom Easter eggs, too. There were plenty here - the 60s cartoon theme as a ring tone, Rhodey's reaction to the other armor, the Roxxon Oil building, possibly even Captain America's shield - but no one called attention to them. They were just hidden in the background waiting to be discovered, like actual Easter eggs. Far too often, superhero movies will go really out of the way to throw a bone at the fanboys; at best it's distracting, but at worst it stops the movie dead for the sake of a joke that most of the audience neither gets nor cares about ("What, Wolverine, you'd prefer we wore yellow spandex?" *WINK!*) Usually when that happens, Erin will lean over to me and ask, "That one was for the nerds, wasn't it?" She didn't do that once in Iron Man, even though there were several background elements that I recognized as references to the comics. Well-played, people.