Short reactions to some things I've read (and one thing I've heard) lately. Possible spoilers, so let's be careful out there.

DC Universe #0 - Not particularly bad in a technical sense, per se, but it didn't make me want to read any of the series it was pimping (well, maybe I'll eventually get around to Legion of 3 Worlds, but I'm not sure), and it pretty much confirmed that I'm still not interested in most of what's going on in the mainstream DCU these days, so as advertainment goes, it pretty much fails. I did think the subtle changes in the look and feel of the narrative captions over the course of the issue were a great effect, though. So there's that.

Invincible Iron Man #1 - Initially, I only picked it up to see if Fraction was going to continue any plot threads from The Order, and he sort of does, but there's a lot more to like about this book, too, mostly in the form of the lead character himself. Fraction's Tony Stark is like a Greatest Hits version of the character: still a playboy, but also an official Wile E. Coyote - SUPER GENIUS type of guy who literally never stops dreaming up new ideas or planning for what he hopes is every contingency. And also, Fraction's Pepper Potts is still one of the best supporting characters not currently featured in Blue Beetle that you'll find in comics today. Great all around, and I'll be back for more... maybe even monthly. I haven't said that about an Iron Man book it about 15 to 20 years.

Little Things: A Memoir in Slices - More autobio from Jeffrey Brown, though this time his vignettes aren't tied together by any central theme or event. These literally are a collection of mostly unrelated little happenings, and the end result is pretty scattershot. I still enjoyed the book, and I remain a fan of the way he continues to prove that even the most mundane lives have moments worthy of recording for posterity, but I prefer his work more when it tells an actual story, not just a clumping of random anecdotes. Worth checking out if you're a fan, though.

FCBD Marvel Adventures Iron Man & Hulk & Spider-Man - It's a Marvel Adventures book featuring the three title characters (and Ant-Man) taking on the Mandarin (and a giant, immortal ant guardian) in the ruins of Machu Picchu, written by Jeff Parker and Paul Tobin. Yeah, look, if you like fun superhero comics, you're gonna need this. And get extras to give to any kids you know while you're at it. Watching Spider-Man trying to explain Trilogy of Terror alone is worth the price of admission. And since the book was free, you're getting like a thousand times the value out of said price of admission.

Blue Beetle #26 - I was worried that having to flip back and forth between the all-Spanish language story and the English script in the back would make for an annoying read, but it ended up working out alright, and unsurprisingly for this book, what we got was a nice little story about family. I love that, so far, even the fill-in writers all understand exactly what makes the book work and don't tinker with the formula. And it's easy to see why Jaime's mom is such a great character, because her mother is pretty awesome, too. The issue features some great art by Mike Norton, as well, though one portion was a little confusing for me... Traci 13 is communicating astrally with Jaime while she's physically playing with his baby cousins, though the art doesn't differentiate between corporeal Traci and spectral Traci, so she looks like she's in two places at once. That little quibble aside, a great package all around.

FCBD Comic Book Diner - An anthology of kid friendly strips and stories from the Kids Love Comics collective. Not everything is great, but A.) I'm not the target audience here, and an actual kid (as opposed to little old manchild me) might like more of it; and B.) it's got Patrick the Wolf Boy, Amelia Rules, and Buzzboy in, and that's enough good for three whole comics right there, so there's more to like that not with this one. 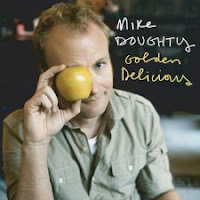 Mike Doughty - Golden Delicious - I've been a big fan of Doughty since his Soul Coughing days (and not just because we share a last name, though I think he pronounces it "Doe-tee," and I find it sad he goes through life say his own name wrong), but I've found in the past few years that I like his solo work even more. And while not quite as great as his his previous record, Haughty Melodic, there's a lot of goodness to obsess over here. He seems to be revisiting some of his Soul Coughing work, actually, dipping back into some of the hip hop, funk, and, well, I guess you can only call it "spoken jazz" that influenced that earlier work. But it doesn't feel like just another SC record, thankfully. He's definitely revisiting the past for the sake of making something new here. "Fort Hood" and "27 Jennifers" will be the ones to get the airplay, but just about everything here is worth your listening time. And if you can, try and get a copy of the accompanying EP, Busking... just the man and his guitar playing for folks in a subway station. Even stripped down, material like "Looking at the World From the Bottom of a Well" works very, very well.
at May 11, 2008
Labels: comics, music, The Dig List