Brave and the Blue / An Unofficial 5 for Friday

So they've finally given the official announcement that the next Batman cartoon, Batman: The Brave and the Bold, is coming to Cartoon Network some time in the future. Very good news, indeed, especially as they seemed to have learned the right lesson from both Justice League Unlimited and later seasons of The Batman, and that's that people like watching Batman team-up with as wide a variety of characters as possible. And from the looks of the promo image, they're apparently quite committed to that kind of variety: 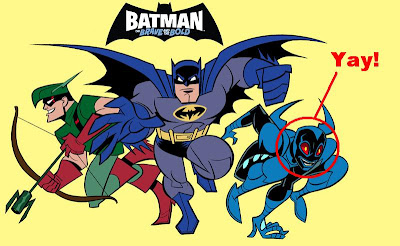 As you can see, I'm clearly quite excited to see them push Blue Beetle right out of the gate (though based on these leading hints, I'm wondering if that'll end up being Jaime Reyes or Ted Kord in that armor... the goofy grin makes me rule Dan Garrett out immediately). I also dig the animation style; it looks like the lantern-jawed icons of the "Dini-verse" DC cartoons mixed with the Superfriends by way of Dick Sprang. It's similar and different at the same time. I'm sure plenty of the online folks hate it already, but A.) online folks hate everything, anyway, and B.) everyone thought Batman: The Animated Series looked weird at first, too, and look how quickly we all warmed up to that?

Over on The Comics Reporter, Tom Spurgeon ends each working week with 5 For Friday, where he and anyone else who can find the time to submit reel off Top 5 lists on a particular comics-related topic. I can never seem to find the time to post anything myself, but I really liked this week's topic, "Name Five Character Progressions That Didn't Really Last That You Liked Anyway," so I thought I'd post the answers I would have given if I could have gotten my act together enough to make an official submission.

1. Clark Kent romantically involved with Lana Lang (during the latter part of their TV anchor days).

3. Steve Rogers as The Captain, and his team of Falcon, Demolition Man, Nomad, and Vagabond.

4. Thunder (A.K.A. Cecebeck, member of the Marvel Family from 6,000 years in the future) as a member of the Legion of Super-Heroes.