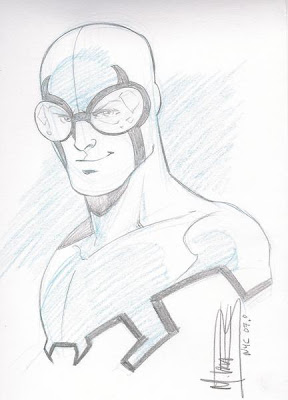 Pretty sure I posted this right after I got it at last year's New York Comic Con, but I've never done it as a Pretty Sketchy post, so here it is again - a fantastic rendering of the second (well, technically third) Blue Beetle, Ted Kord, by DC artist Mike Norton. He's a fantastic artist (check out issues of All New Atom, Marvel Adventures Spider-Man, and an upcoming issue of the current Blue Beetle series for but a few examples), a hell of a nice guy, and possibly my Earth 2 counterpart.
at March 02, 2008
Labels: Blue Beetle, comics, Pretty Sketchy
Newer Post Older Post Home