My life would be so much cooler if it were narrated by Jackson Beck. 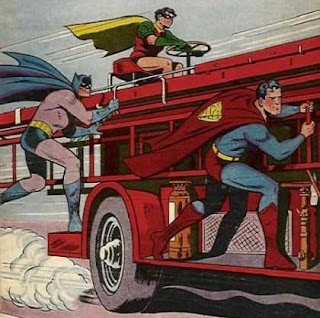 I have learned the following facts from "Batman's Great Mystery," an 11-part serial from the old Superman radio show, which originally aired back in 1948 (I think... I don't have the CDs handy at the moment).

1. You can listen to an entire week's worth of episodes and hear Clark Kent actually be Superman for maybe a combined 30 seconds.

2. I don't think Clark walks anywhere. Even a trip down to the corner hot dog vendor is preceded by a change of costume and a hearty "up, up, and away!"

3. The quickest way to make Robin mad is to oppose The Marshall Plan.

4. If you make rabble rousing, un-American speeches, you're generally pretty cowardly on your own, but you usually travel in a pack with at least 4 or 5 thugs, all of whom call you "da boss," so at least you've got that to even things up a bit.

5. Clark isn't terribly good at this whole secret identity thing. He not only nearly blows his own secret a couple times a week, but he keeps almost giving away Batman's, too. He has to repeatedly stop himself from calling Batman "Bruce," he keeps mentioning that Batman is very wealthy, with money, stocks, and bonds in banks all over town, and when Robin goes missing, he offers to take Inspector Henderson "over to Robin's house" so they can ask his butler, Alfred.

6. On a related note, Batman apparently has multiple bank accounts actually listed under the name Batman. Makes me wonder why Spider-Man had so much trouble cashing his TV show checks almost 20 years later.

7. Never rely on a farmer for anything if you're in a hurry.

8. Robin sometimes refers to Batman as "Batty." Or maybe "Daddy." I couldn't quite tell. Whatever the nomenclature, the jokes write themselves. Feel free to come up with one of your own!

9. As the announcer reminds us, "all men [sic] are created equal," fellows and girls. And if some of our country's minorities aren't always treated equally, well, at least it's getting better! Just don't ask any questions about that Japanese family down the street that was spirited away in the dead of night a few years back.

10. If a villain learns your secret identity (through no fault of Superman, shockingly), don't bother magically erasing his memory. Fire works just as well, is easier to come by, and can't be reversed later on.
at March 25, 2008
Labels: Batman, Old Time Radio, Superman
Newer Post Older Post Home