It's a damn shame Marvel is canceling The Order. Or that writer Matt Fraction is pulling the plug on it himself. Whichever version of the story represents the truth, the end result is the same... a good comic is falling by the wayside before its time, and that's a shame. 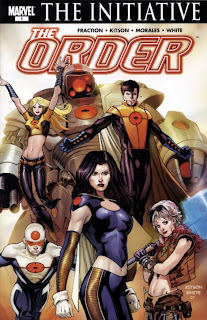 Like a lot of people, I overlooked the series at first. Mostly. I picked up the first issue through DCBS since it was one of their mega-markdowns and because I liked what Fraction was doing on Iron Fist and what little of Cassanova I'd read, and while I thought it was interesting, it didn't grab me right out of the starting gate. I set it aside, and figured I'd go back for the trade eventually (which I do with most Marvel books these days, actually, even the stuff I love like Captain America and the aforementioned Iron Fist). Then came the word that the series was being canceled/rested/whatevered with issue 10, and the resulting outcry from the core audience. That core audience, at least blog-wise, seemed to be people whose opinions I generally respect, so I figured I'd go back and give it another shot, even if I was just paying last respects to a Dead Book Walking.

I'm not quite caught up yet, but 7 issues in, I can see where I went wrong in bailing so early. The Order is a book that rewards patience. It might not give you a whole lot of bang and bluster in each individual issue, but not in that tired, padded out to 6 issues for the trade paperback feeling so common these days. You definitely get the feeling that the story is going somewhere, and that each event, character reveal, or flashback is an important stopping point on the trail. Fraction has said that he's trying to follow the Lost approach in this regard, and it not only shows, but I think it's largely successful to boot. 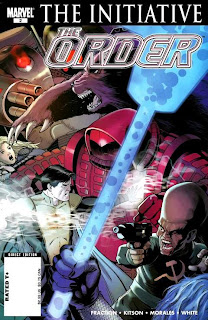 All this time on characterization is well-spent, too. Each issue's main focus on a specific character allows us to get into his or her head in a way we don't often get in superhero comics, much less a team book that juggles over a half-dozen leads and a supporting cast that's just as big. And each seemingly small reveal informs the story being told in some very crucial ways, such as in #5, when we learn that the team's most powerful member may be it's publicist. Or in #6, when we see that Milo, A.K.A. the armored Supernaut, may resent the government that exploited him, but will always remain a Marine at heart (seriously, the way he fought back and rescued fallen teammate Aralune in that issue legitimately made me cheer).

But is this strength also a weakness, perhaps even the cause of the book's (perceived or actual) lack of success? A lot of us wait for the trade now. In order for a book to really capture our interest - at least enough to keep the monthly going strong - a book really has to hit the ground running with page one, issue one, and never look back. Sadly, I don't know if a lot of us - and yeah, I include myself in here - have the patience anymore to really let a book take it's time in Going Places (in the immortal words of Ti Kwan Leep student Ed Gruberman, "Yeah, yeah, patience. How long will that take?"), no matter how great our patience is rewarded by those Places. It's not like this sort of thing is at all new in comics: OMAC, Omega the Unknown, Chase, Chronos, The Thing, and Manhunter (repeatedly) are all notable examples of books cut down long before they got to where they were going. And honestly, if they weren't so likely to be tied in to the large goings on of Final Crisis, I'm sure All New Atom and Blue Beetle would be on that list, too, if sales numbers are any indication. 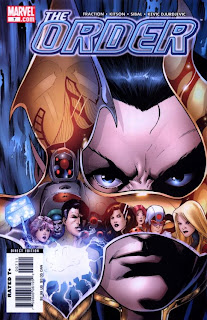 Whatever the story behind The Order's untimely end, it's a good read, and I'm sorry to see it go. But maybe it's better to get 10 great issues rather than a longer series that eventually runs out of steam, loses that spark that made it special in the first place, and just chases it's tail for the duration of its existence (also a bit like Lost, I suppose). If nothing else, it'll make complete re-readings easier, and with this book, I can guarantee that those will be happening.
at March 23, 2008
Labels: comics, Marvel, The Order
Newer Post Older Post Home