The Star Wars prequel trilogy... I think we can agree that's a fairly divisive issue, at least as far as fandom goes, yes? The kids seemed to like it pretty well, but for those of us who grew up with the originals, it was a whole other ball of wax. Some folks liked 'em, others were less receptive, and then there's the whole group of people who claim that George Lucas forcibly sodomized their childhoods at gunpoint. As for myself, I don't think they really hold a candle to the original trilogy, but while they certainly have their problems, they had some positive things going for them, too, which means they're perfect fodder for a 5 Up, 5 Down.

1. There was a feeling that each and every one of us got when we sat down to see The Phantom Menace for the first time when we saw the sequence of the "A long time ago in a galaxy far, far away..." card, the opening blare of the John Williams theme, the logo shooting away from us, and the title/narration crawl. Whether we liked the movie that followed or not, the sheer joy of anticipation was amazing... if I could bottle that excitement and sell it to the world, I'd be a billionaire in a few short months.

2. John Williams still has it. "Duel of the Fates," especially, was a great piece of craftsmanship, and probably ranks among the finest works of his career. It scored that climactic battle of Phantom Menace so perfectly.

3. The Clone Wars animated series on Cartoon Network wasn't just good storytelling in the Star Wars universe, it was good television period, and a nice little oasis of awesome in the midst of a fair-to-middlin' movie series. The tie-in comics from Dark Horse were a lot of fun, too. 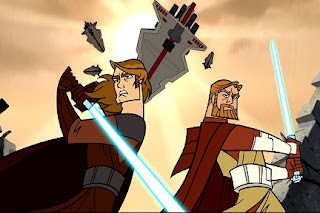 See? Anakin doesn't *have* to be annoying!
3a. Clone Wars was also notable for being the one piece of Star Wars TV that was at-all watchable. The Droids and Ewoks cartoons, the two Ewok TV movies, and the ever infamous Star Wars Holiday Special all might qualify as varying levels of war crime.

4. Bigger, better lightsaber battles, and in greater numbers to boot. Who didn't love that? Especially the Yoda/Dooku fight in Attack of the Clones. Honestly, who didn't mark out over that? I definitely missed the look and feel of the puppet Yoda, but if CGI Yoda made that possible, then it was all worthwhile.

5. While none of the performances were particularly great, I thought Ewan McGregor made a great Obi Wan Kenobi. He was able to channel the feeling Sir Alec Guinness originally brought to the role without doing an outright imitation, which I appreciated. I also appreciated the sarcastic delivery of so many lines... the only way to really bring life to Lucas lines are to sort of mock them as you say 'em. This is why we all loved Harrison Ford in the originals.

5a. It's worth noting that if you skip all the Anakin/Padme scenes in Attack of the Clones and just follow Obi Wan's side of the story, it becomes a significantly better movie.


The Cons (and I'll try to avoid the more obvious ones; well, I do have to include one obvious one):

1. Let's get this out of the way. Him. You know, him. I'm not even gonna mention his name, nor link to his StarWars.com profile or anything. Everyone knows who I'm talking about, and more importantly, why. Let us move on and never speak of this again. 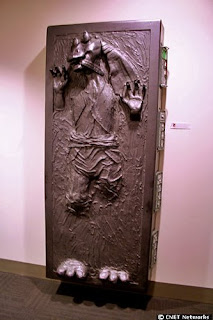 "Yeah, Jabba... you can just keep that one."
2. In the heart of the galaxy's baddest mo-fo, there remains a sad, scared little kid (Who can't act as a boy or a teenager. And hates sand.). Gah, that's so 70s touchy-feely I could barf.

3. The histories and rules of the Sith, the Jedi, and Republic in general as presented in the movies contradict a lot of stuff from various Expanded Universe comics and novels written in the years between the first and second trilogies. Now, obviously since this is all Lucas's baby and everything, he certainly has the right to dictate canon as he sees fit. But the problem is, a lot of those comics and novels were better than the new trilogy, and it annoys me to see decent storytelling overlaid with bad.

4. The Revenge of the Sith opens with a big space battle and a wheezy General Grievous, both of which are the direct result of events at the end of the Clone Wars toon. The reasoning for the battle is explained a bit in the narration crawl, but not very well, and there's no in-movie explanation for that asthmatic robot over there. I hadn't yet seen all of the cartoon when I went to see the movie, and I'm willing to bet a lot of people didn't see it at all, so there was a lot of headscratching there. If it's important enough to be in the movie, it's important enough to be explained in the movie.

4a. But Lucas has always had a problem with this... I knew that Vader was a Dark Lord of the Sith, and how he got in that big suit in the first place, but that was due to the storybooks and trading cards I had as a kid. None of that is mentioned in the movies at all. I don't think we hear the word Sith once in the entire original trilogy, even after they've been Special Editioned to death!

5. No Admiral Ackbar or Nien Nunb. Come on, George! We see younger versions of Vader, Boba Fett, Chewbacca, Obi Wan, Yoda (well, Yoda is still old, but he's not quite as old here, I suppose) the Emperor (ditto), Luke & Leia, and even freakin' Greedo. Where's Ensign Ackbar? Or Lil' Nien Nunb? The public demands it!