Tinkering and one cool thing.

Tinkering with the look & feel a bit. The white-on-black was getting a little hard on the eyes. The black-on-white might not be much better, but I figured it was worth trying out for a little while, anyway. Let me know what you think if you're not blinded by the glare.


I own a couple of MiniMates figures, but I'm not really into them, per se. This set, though? 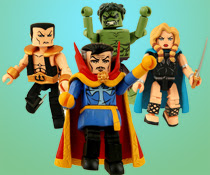 Those are just awesome. If I find these cheaply at the New York Comic Con, they're probably coming home with me. Because, honestly, who wouldn't want the Defenders on their shelf? Too bad there's no Nighthawk, though. Maybe they'll do a Nighthawk/Hellcat two-pack down the line?