I never let a lack of knowledge keep me from forming an opinion.

I haven't seen most of the Oscar nominated films this year, but I still have strong opinions about who should win. Here are my picks for the categories I actually care about. Here's the list of nominees should you wish to follow along at home.

Best Actor - I think the race here is between George Clooney, Daniel Day-Lewis, and Viggo Mortensen. Tommy Lee Jones makes as many crap movies lately as good ones, so he's out, and Johnny Depp is just here to appease the Hot Topic crowd. Clooney is tough to beat, because really, who doesn't like the guy (Bill O'Reilly doesn't count, being a living rectum and not an actual person), but I think Day-Lewis wins, because in a tight Oscar race, always bet on the Brit.

Best Actress - I think Ellen Page should win, because she was awesome in Juno (also, she was Kitty Pryde), but the hipster picks never win here (see also: everyone nominated from Pulp Fiction), so I think you'll see Julie Christie or Cate Blanchett here (because, hey, British). At which point, Laura Linney will rise from the audience and assassinate the winner because she's tired of going home emptyhanded.

Supporting Actress - Cate Blanchett is almost a certainty, because people won't shut up about how amazing it was that a woman played Bob Dylan. Meanwhile, I don't care, because I really don't like Bob Dylan, so why would I see a whole movie about him? But still, I guess it's impressive, and the Academy likes women playing dudes (Felicity Huffman, who didn't win, and Linda Hunt, who I think did, among others). Also, British.

Animated Film - Haven't seen any of these yet, but I'm pulling for Persepolis, because it's the one I'm most excited to see, and I also enjoy it when a non-Disney or Dreamworks movie wins here (like when I was excited Miyazaki won for Spirited Away, even though I didn't really like Spirited Away and it was up against Lilo and Stich, which I loved. But still, the man who made Kiki's Delivery Service and Nausicaa gets a lot of leeway with me. And this parenthetical aside is really getting away from me, so I'll move on.).

Make-Up - I only care about this category because, for the love of God, I don't want anyone to be able to utter the phrase "Academy Award Winning Film Norbit" and actually have it be true. So, you know, not Norbit.

Original Screenplay - I think if Juno wins anything, this will be it. Because one of the screenplay awards is always the Quentin Tarantino Award - the prize that says "We liked your movie a lot. It was hip and clever and fun, and maybe it even made us a little bit happier that movies exist in the first place. But it's not serious enough to win the big prize, so you'll have to settle for this." And Juno is definitely that movie this year. So if it at least takes home this, I'll be happy. Also, after seeing this movie and reading her memoir, "Candy Girl: A Year in the life of an Unlikely Stripper," I now have a huge writer's crush on Diablo Cody. 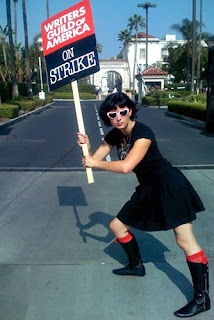 I mean, who wouldn't?

Adapted Screenplay - Well, I'm the most excited to see No Country for Old Men, so I guess I'll go with this, although There Will Be Blood has enough people quoting the milkshake bit that I guess you can't write it off completely. Write it off! In a paragraph about a screenplay award! That's a joke, son!

Best Picture - Again, pulling for Juno, but I highly doubt it. All the rest are movies about crime and/or period pieces. I'm gonna go with Atonement, actually. It's got that downer ending that Oscar voters dig, and yes, it's British. In Hollywood, the British Invasion never really ended.
at February 24, 2008
Labels: movies