Capes and dinosaurs and McCarthyism, oh my! 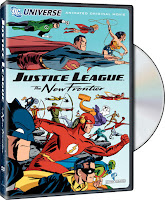 I was cautiously optimistic about Justice League: The New Frontier. While I was excited to see my very favorite DC superhero story turned into an animated movie, well, adaptations are a dicey proposition on the best of days, and if Hollywood as proven anything, there are million things that can go horribly, Hindenburgedly wrong on the journey from page to screen.

Yeah, I compared the process of turning a comic book into a cartoon to one of the most infamous air disasters in world history, and made an adverb out of it to boot. Cope.

Thankfully, my worries were for naught. It's not perfect, but there's much more right than wrong here, and the end result is a very entertaining movie.

Most folks initially seemed concerned with the length. At a slim 74 minutes or so, people worried about how much of the story would make it on to the screen. And yeah, at that running time, a story told over the course of 6 embiggened issues is going to get truncated. We lose some memorable sequences, a few characters' roles are combined or outright cut, and some of the character building scenes have to be eliminated. And yeah, that's too bad... I would have loved to have seen the prologue with the Losers, or the big Superman/Batman fight, but I think they did a good job keeping the core of the story intact. The plot moves at a pretty quick pace, but they did a good job of keeping the "there" there, if you know what I mean.

I think my only complaint about the story is that they don't do a good job of making the thing accessible to people who haven't already read the comics or are unfamiliar with the characters. J'onn J'onzz goes from looking like a police detective to actually becoming one very quickly, and while I know what happens in the interim, my wife wouldn't, and I know I'd be called upon to explain how that happened if she were to watch it. I'd also have to explain all the characters who are seen, and maybe have lines, but are never identified. Where I see Adam Strange or the Challengers of the Unknown, Erin's going to see Guy With a Fin on His Head and Those People in the Purple Jumpsuits. It's such a little thing, really, and very easy to fix - how hard can it be to drop someone's name into the dialogue once in awhile? - but it can be a huge stumbling block for those new audiences they presumably hope to reach.

All that aside, they've really put out quite a product here. The animation is a nice mix of the traditional DC animated TV series style (the type seen in everything from Batman: The Animated Series up through Justice League Unlimited) and creator Darwyn Cooke's own artwork, and it works quite well. A few sequences lifted directly from the page are particular standouts, especially the Flash's sonic boom as he races to stop Captain Cold in Vegas. I honestly caught myself muttering "wow" watching that bit. And the casting is almost uniformly top notch. Neil Patrick Harris is great as the conflicted Flash, Kyle McLachlan's Superman is suitably iconic and authoritative without being corny, and while Jeremy Sisto's Batman sounds cold and menacing, you can hear the subtle changes in later scenes as tries to change his image a bit so as to "frighten criminals, not children." I thought David Boreanaz was a bit flat at times, but hey, he's only Hal Jordan, so I'm willing to let it slide.

Long story short - too late - you might have a hard time wading in if you're not already a fan, but if you can get over that hurdle, it's a fun, entertaining adaptation that manages to capture the look and feel of the source material in a way seldom seen before. Give it a shot, if you're so inclined.
at February 27, 2008
Labels: comics, DC, movies