Meet the Beetle (or, when Joe gives you lemons, read better comics)

Hey there, Spider-Man fans... are you so upset by recent events that you feel compelled to set your issues on fire? Well, put that Zippo down, pal - seriously, put the Zippo down - and let me ask you a question.

Did you ever think of giving Blue Beetle a try? 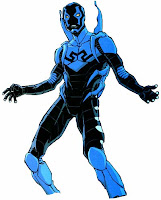 Buy his book and he'll bust a move for you.

If not, you should. It's a great book, and it'll seem familiar to you in a lot of important ways.

Large, supporting cast, several of whom have subplots going at any given time? Check!

Parental figures who instill strong values and a sense of responsibility? Check! 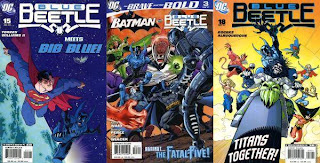 Superman, Batman, the Titans... dude gets around.
Complicated relationship with a recurring villain due to said villain's connection to one of the hero's best friends? Check!

Cute love interests, at least one of which is a redhead? Check!

Traci 13 or Brenda... the choice we all wish we had to make when we were 16.
Acts like a teenager? Check! And better still, the character actually is a teenager, so you don't have that uncomfortable feeling that the publisher is not-so-subtly making fun of you by depicting your hero as a man-child!

The conclusion here is clear as day, people... Blue Beetle is the best Spider-Man book to have been published in the last 20 years (or at least since Marvel pulled the plug on Kurt Busiek's Untold Tales of Spider-Man, whenever that was). Who knew?

(Paid for by The Committee to Get More People to Read Blue Beetle so We Don't Have to Launch Some Online Awareness Campaign to Save the Book When it Becomes in Danger of Cancellation)
at January 09, 2008
Labels: Blue Beetle, comics, looking on the bright side