Went to the small, semi-regular comics & collectibles show in one of the Attleboros (North or South... I never remember which one) this past Sunday, and I bought me a Heroclix piece. I haven't played the game in a few years and have sold off most of my collection, but I still have a few of them to display, and one look at this one, and yeah, I had to have this for my geek area in the house: 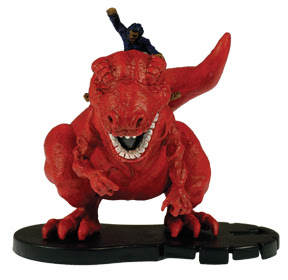 Devil damn Dinosaur and Moon Boy. I mean, come on. I'm not made of stone here.

Also picked up a bunch of great fifty cent books - the first three issues of Rom, some Micronauts I needed, almost all of The Loners mini-series, and a French-Canadian issue of Spider-Man, to name a few - but even those great finds tremble before the awesome might of Devil Dinosaur, tiny though he may be in comparison. There are some things in life you just need to own. This might be two or three of 'em.

On a related note, may I address the comic and collectible fans in and around the area of whichever Attleboro I visited? Thanks. Huddle up, folks.

Look. I know it's easy to say comic fans are hygienically challenged. It's one of the biggest cliches of the hobby. But honestly? A lot of y'all stink. And badly at that. Soap. Water. They're your friends. Embrace them. Use them.

To illustrate my point a bit... there was a gal there with dreadlocks. When I went to the University of Maine, one of the great hippie havens of the northeast, I encountered a number of dreadlocked girls. As most of 'em stank of patchouli, weed, and unfiltered cigarettes, you could generally smell them an hour before you'd see them. This girl? No discernible odor whatsoever. The dude next to me going through some of those fifty cent bins? Cheese and vomit.

Comic book fans of the Attleboros and surrounding environs... a hippie smelled better than you. Think about it, won't you?
at January 08, 2008
Labels: comics, Jack Kirby