As I said earlier, Joe provided the voice for a couple Hanna-Barbera cartoon characters, but the most famous was probably Babu, the rotund, inept genie-in-training. 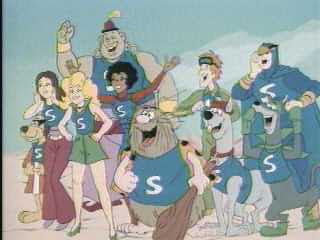 If you don't know who I'm talking about, he's the big dude in the back, behind Captain Caveman and the Teen Angels (this is the only picture I could find of Babu! You've let me down, Google Image Search). Babu showed up on The New Scooby Doo Movies and Laff-A-Lympics (where the above pic comes from; Babu was a member of the Scooby Doobies team), but he got his start on Jeannie, an cartoon spin-off/reworking of I Dream of Jeannie, only Jeannie herself is younger and a redhead, and her master is a teenage surfer instead of an astronaut. And hey, said master was voiced by a pre-Star Wars Mark Hamill.

There looks to be a full episode or two posted over on YouTube as well, so if you'd like to see (well, more like hear) Joe in his cartoon glory, scoot on over and check it out.
at January 22, 2008
Labels: Joe Besser rules