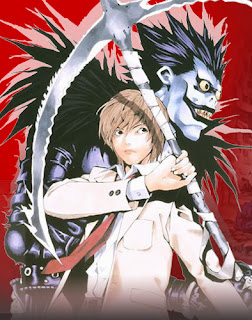 Okay, so after reading the first volume of Death Note, I sort of understand the near-universal praise it gets. I'm not usually a big fan of horror comics, no matter the nationality, but they've hooked me well and good with this one. I don't think they got me for the same reasons they latched onto the imaginations of most other folks who've read it, though.

For the uninitiated - and in as simple terms as I can describe it - it's the story of a brilliant teenager, Light Yagami (he's the dude above who doesn't look like Hot Topic's #1 customer), who finds a Death Note, which is the notebook of a type of death god called a shinigami. If you write someone's name in the book, they die. Light sees this as his chance to improve the world, so he starts writing criminals' names in the book. This doesn't go unnoticed by police worldwide, who start attributing the deaths to a killer they dub "Kira" and do everything in their power to track him down. Light enters into a cat and mouse game with the law, particularly mysterious master sleuth "L," as he becomes increasingly corrupted by the power of the Death Note.

It's a compelling plot, to be sure, and a hell of a page turner, but that's not what ultimately grabbed me.

Light's the smartest kid in his school, perhaps even all of Japan. He wants to be a great detective when he grows up. He's even been known to help his father, commissioner of one of Japan's highest law enforcement agencies, solve crimes at the dinner table.