We all have that one musician or band we love above all others. We read all the articles, we go to the shows when time, money, and opportunity allow, and we acquire every track we can, right down to the most throwaway of B-sides. For me - and this will come as no shock to you regulars out there - that musician is Juliana Hatfield. 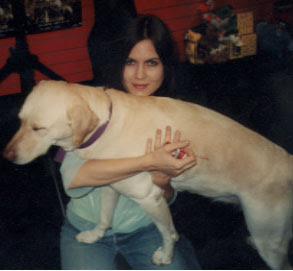 I type about her a lot on this blog, and the reason is pretty simple - I like her a whole damn lot. Not in any sort of creepy, stalkery, building a shrine in my basement sort of way, but there's definitely a lot of love in my heart for this woman and her music.

And it all started as a fluke, really.

In early 1994, Juliana was touring in support of the Juliana Hatfield Three record "Become What You Are," and said tour was making a stop at the University of Maine in Orono. I was a senior at Bangor High School at the time, and plans were made with friends to go to the show. It didn't matter that I didn't know much about the woman and had maybe heard one of her songs on the radio all of one time... it was a chance to see a half-decent concert in the Greater Bangor area. That sort of thing happened, um, never. It never happened in the Bangor area, or at least infrequently enough to seem like never. So I was happy to go along; even if I ended up not liking the music that much, it was a night out with friends, and one that would most likely end up at the local truck stop after the show. Music, companionship, and late night curly fries... life doesn't get much better then that when you're 17. Sounds pretty fab at 31, for that matter. But I digress.

So we go to the show, and the opening band was called Cold Water Flat. All I remember is that they weren't very good and that the head of one of their guitars had a vaguely Buckwheat-like look because the dude didn't cut the excess string. A bad opener can set the mood for an entire show, so I was worried when Juliana and her band took the stage. But that trepidation disappeared quickly, and she pretty much had me from note one. Not just because she was cute - though it certainly didn't hurt that she was... the whole "just got out of bed and threw my hair up in a ponytail" looks he was working looked quite good on her - but because these songs that I had never heard before just grabbed hold of me and instantly worked their way into my head, almost as if they were saying, "We're your favorites now. Get used to it."

So obviously, as soon as I had some money again, buying "Become What You Are" became Priority A1. And honestly, I don't think it came out of my CD player for weeks thereafter. The melodies had these hooks that I couldn't get out of my mind, not that I'd have been inclined to even try. And some of the themes of the lyrics - desperation to escape small town ennui, the desire for acceptance from a would-be role model who just isn't interested, loving an artist's work so much you wish you could swallow it whole and make it a part of you - well, I was 17. These words spoke to the daily melodrama of that age. I could relate. This record made me say, "Yes, that's it exactly. This woman gets it."

And that's really the root of all this, isn't it? There's that album you hear as a teenager that lets you know you're not going through it all alone, that your problems are ultimately universal, so hang in there and we'll try and understand it together. Most of the people of my generation (at least the ones I knew, anyway) discovered this a few years earlier with Nirvana's "Nevermind," and to a lesser degree, Pearl Jam's "Ten," I suppose. But I always was a little bit behind the curve. And I tend to prefer a catchy melody and an elfin voice to feedback and growls most days. I did get there, though, and that's the important thing.

And so, I did what everyone else does whenever they finally find the voice that Gets It: I became a fan for life. It's not like we ever have any choice in the matter; I never felt like I did, anyway. It just sort of felt like a foregone conclusion.

And though the experience has never really been repeated - as good as some previous or later albums may be, they've never had quite the same power over me as "Become What You Are" - it has always been rewarding. The few concerts of hers that I've been able to see have all been pretty terrific (my absolute favorite moment from any of them being a solo acoustic version of "Spin the Bottle" that she began her encore with at a show in Providence). And I even got to meet her once at a short Newbury Comics in-store show. Part of me just wanted to give her a big bearhug and thank her profusely for all that her music has meant to me, but I was able to reign it in (thankfully, as she looked overly modest and clearly uncomfortable in dealing with fans), talk to her briefly, get an autograph and the picture at the top of this post (her dog Betty, by the way, was honestly one of the 5 coolest dogs I've ever encountered; Juliana may be uncomfortable with notoriety, but Betty is 100% rock star).

It was a brief, quiet moment, but it was better that way. A lot of times it's enough to know that someone contributed something important to your life, rather than try to tell the person in question precisely how they did so. Explanations aren't even necessary in these cases: remember, they Get It.
at October 02, 2007
Labels: Juliana Hatfield, music