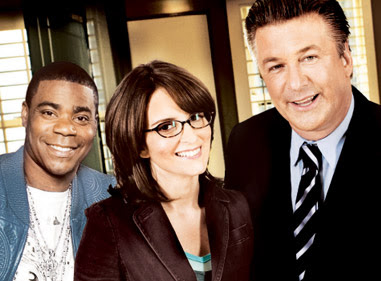 Okay, so I pretty much dismissed 30 Rock after the second episode last year. Now, though, after being convinced I should give it another shot, I've been working my way through the Season 1 DVDs and have watched last night's season premiere, and I have come to the conclusion that the me of last year was either stupid, insane, high on crack, or possibly some combination of all three, because I was clearly wrong. This show is, in fact, the best comedy on television. I love it so much I want to take it out behind a middle school and get it pregnant.*


* Okay, so that last bit was a little desperate on my part. See, I read somewhere that Tina Fey occasionally Googles lines from the show to see if people are using them online, and I think it would be cool if she saw that and left a comment. It'd be even cooler if she came over to my house and gave me big hugs, but given the realities of our schedules, geographic locations, and family situations, I'll settle for a blog comment. But all pandering aside, it's a good show. Watch it. Don't be dumb like I was. It's good for your mind grapes.**