So just a day after joining Chris Sims's "Free Rom" crusade, I read Uncanny X-Men #187 in my copy of Essential X-Men Vol. 5. For the unfamiliar, the issue depicts Storm and Forge (and eventually, Colossus and Rogue) fighting Rom's alien witch enemies, the Dire Wraiths. These panels appear near the end of the story (sorry for the crap scanning): 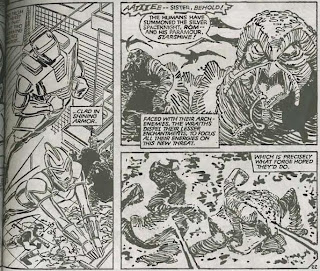 (Click to biggie size.)
So wait... Marvel can't reprint an issue of Power Man & Iron Fist guest-starring Rom, or presumably his actual series for that matter, but he and his gal Starshine can appear (and get namechecked) in this X-Men book? How does that work? Is it because this is just a cameo appearance? Is it because they end up being holograms created by Forge to fool the Dire Wraiths? (Oh, um, spoiler, I guess?) Were the folks at Hasbro willing to let a just a panel or two slide? Does X-Men money adequately cover the rights fees needed for this one appearance? And what about Scarecrow's brain?

Whatever the reason(s), I'm thinking that if they can do it once, they can do it again on a much grander scale. Come on, Marvel! Stop spending all your time and energy fretting over superhero marriages and give us what we really want: Disintegrator Gun-Wielding Toaster Men From Outer Space. If nothing else, you should be proud of the fact that your employees were able to wrangle a fun comic book out of a toy so obviously terrible as this one: