The Five and Ten (Doctors) 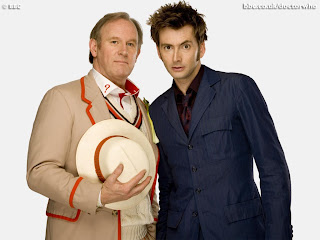 Tenth Doctor David Tennant is going to meet the fifth Doctor, Peter Davison, in a special segment of BBC's Children in Need event in November.

Not the first time the Doctor has ever run into himself ("When you travel around as much as I have," he once said, "it's bound to happen sometime."), but it will mark the first time it has ever occurred within the continuity of the new series. So while it sounds fun (I always enjoyed multiple Doctor stories, even if they do end up being rather silly), it'll be really weird, potentially even a bit uncomfortable to watch. I mean, the costuming alone shows how much the show has changed in its new incarnation. So I'm thinking they're wise to do this as a one-off thing for a charity event rather than making it part of a regular episode. That way, the folks who don't like it can just erase it from their personal continuity.

But still, I'll admit I'm pretty psyched to see this. 5 looks like he needs to lay off the jelly babies a bit, though. (And I can't wait to see the theories that fandom concocts to explain why he looks older here... it'll make that Season 6b stuff seem like child's play, I bet.)
at October 22, 2007
Labels: Doctor Who, TV