Still with the Batman over here. 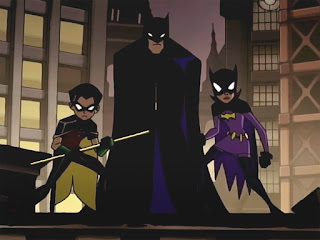 So the new season of the WB's CW's cartoon The Batman kicked off this weekend, continuing with the introduction of the Justice League begun at the end of the last season. In the two-part season premiere, we get to meet this show's version of Superman and company (Lois, Jimmy, Lex, and so on), and I have to say, it was pretty good.

What I saw of it, anyway.

See, our local CW affiliate also showed some college football game on Saturday, and the pregame show aired in the timeslot when Batman should have been on. They were nice enough to reschedule the show to air after the game, but when was the last time a televised football game actually ended on time? And so the rest of their day's programming wouldn't get messed up, they joined up with Batman "in progress," so I ended up missing the first half of the show.

I'm 31 years old, and my cartoons are still being pre-empted by sports. I'm sure that speaks poorly of me, confirming for all time my manchild status, but I choose to think it reflects even more poorly on television. Better for the esteem, you know.

Anyway, the show itself (what I saw of it) was good. I thought it was kind of silly to basically rehire all the people who voiced the Superman characters over on Justice League Unlimited (George Newbern, Dana Delaney, Clancy Brown) to re-do the roles here - I would have preferred new people, since this is an unrelated show and everything, and this just plays to heavily to the JLU fanboys (which I admittedly am, but still) - and Black Mask will, never, ever be an interesting villain, but it was fun. I'm anxious to see how the rest of the story, and the rest of the season (which promises more Justice League appearances) pans out. Provided the stupid football people let me, anyway.
at September 24, 2007
Labels: Batman, TV