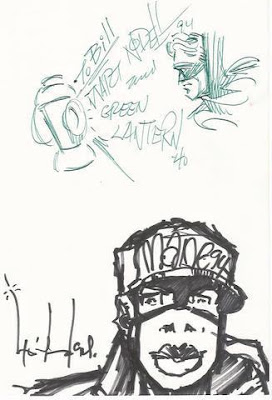 The top is the Golden Age Green Lantern, Alan Scott, by his creator, the late, great Mart Nodell (easily one of the nicest folks I've ever met in my life). On the bottom, we have Static, as depicted by one of the artists on the series, Wilfrid Santiago (Static's hat says "Maine '94," since that was when and where he was drawn). Both sketches acquired at NostalgiaCon 5 in Bangor, ME, the last of the shows put on by my favorite local comic shop of yore, Nostalgia Ink.
at September 25, 2007
Labels: comics, Green Lantern, Pretty Sketchy, Static