Everyone in the world has already posted and linked this, but one more bit of attention won't hurt: 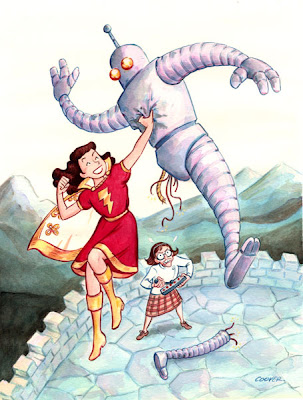 Mary Marvel by Colleen Coover (from both the Periscope blog and Colleen's LJ). This makes me happy. A Mary comic (even just a one-shot) from Colleen and her hubby, Paul Tobin, is probably too much to hope for, but even just a print of this would be pretty awesome.

In other comics-related stuff, having now finished the second Blue Beetle trade paperback, I think I can pretty much say that this is probably the best regular continuity book DC is publishing today, and I was a fool - a fool, I say! - to not read from the beginning.

Now comes the dilemma... to start picking up the issues, or stick with the trades? Because it reads fantastically in trades, I must say. Both definitely showcase an ongoing narrative, but still offer complete in-themselves stories with clear beginnings, middles, and endings. And then they throw in a nice little - well, not really a cliffhanger, maybe more like a little stinger - to grab your interest and make you look forward to the next story. And yet, I definitely get the feeling it needs the monthly help in order to make the eventual trades a reality. And no, I can't afford both. It's a puzzlement to be sure.

I don't celebrate, but to those of you who do, Happy Holy Pasta Week!

(For more info as to what this is all about, check out the Wikipedia entry.)

(And for the record, I agree with the cause, but, you know, I have a two-year-old. It's hard enough to chase him and keep up with the extant holidays, much less new ones. Though if you replaced the week's climax, "Talk Like a Pirate Day," with "Stalk Like a Ninja Day," I might be inclined to clear my schedule.)

Watched the Doctor Who episode "Blink" on Sci-Fi on Friday night.

Every now and then, the new version makes me realize why little Brit kids would so famously hide behind their sofas while watching this show. Let's just say I'll never trust statues again.

Also - Possible Spoilers Here - older Billy tells Sally Sparrow that the woman he married after being trapped in the past was named Sally, too. And Kathy Nightingale, after being sent further back into the past, named her youngest child Sally. It's never explicitly stated, but can we all agree that they're both the same girl? Nice bit of cosmic/temporal coincidence there.

Dave Campbell has discovered an entirely new field of study: Nostalgiametrics, the Science of Today for Yesterday's Crap. Using a carefully constructed point system, you can determine if the television you liked as a kid was actually any good or not (unsurprisingly, Airwolf ranks pretty highly). Science rules.
at September 16, 2007
Labels: comics, Doctor Who, science, TV
Newer Post Older Post Home