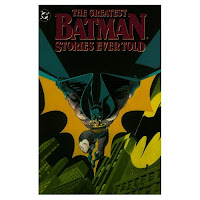 Still have Bats on the brain. Blame the kiddo. I've seen that Adam West movie about two and a half times this week, and since tomorrow is supposed to be rainy and I'm home with him all day, I expect the number to go up still. But it's made me think about comics, and that's never a bad thing.

Anyway, this book on the left here? It's pretty groovy, and the title doesn't really lie. The contents of this book really are some of the best Batman stories ever published. But they aren't all necessarily my favorites, you know? So if I were to put together my own Bestest Batman Yarns Ever Put Down On Paper collection, this is what it would most likely contain (in no order other than that in which I think of them):

You know, there's more I could probably name, but good lord, that's quite enough for now, don't you think?

Anything you think I left out that deserves inclusion (and no, I didn't forget Dark Knight Returns or Killing Joke, so don't bother bringing them up), or anything I should check out that I might not have? Suggestions always welcome.
at September 27, 2007
Labels: Batman, comics
Newer Post Older Post Home