This, that, the other thing, and something else besides.

On vacation next week, though in my head, I've been gone for days already, hence the light posting this week. Here's some stuff now, though:

Alex Ross and Jim Krueger are reviving a bunch of Golden Age characters for a project called Superpowers for Dynamite. I was getting ready to be all snarky - "And here I thought Ross's next project would be a gritty re-conceptualization of Wheelie and the Chopper Bunch," that sort of thing - and then I see this post on Newsarama and the accompanying illustration: 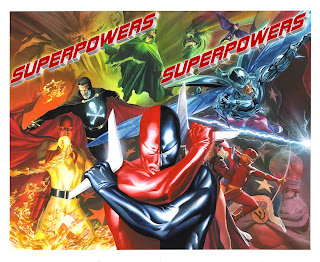 Okay, I admit, that's pretty cool. Looks like Alex got out his old copy of Jeff Rovin's Encyclopedia of Super-Heroes and picked out characters like a kid thumbing through the Sears Wish Book at Christmas time. Nice to see him direct his considerable industry clout somewhere other than Saturday morning again.

I don't see anything about it on their website, but Thursday, July 19th, is supposed to be Free Iced Coffee Day at Tim Horton's. So if you happen to live in a state that has a Tim Horton's somewhere - or are literally anywhere in Canada - you should partake, because their coffee is good. I also recommend the maple dip donut, but your mileage may vary.


So does this make Jon Lovitz one of America's newest heroes? Because I think you can make a pretty convincing argument for the fact now. I mean, it's not like we all haven't wanted to do the same thing at one time or another.

This is probably my favorite Muppet Show segment ever.

I love the puppetry of the African mask characters, and the song is catchy as hell. Can't wait until this episode is out on DVD so I can show it to Liam (of course, I'll be happy to have access to more than just season 1 at this point, because even at the age of 2, the kid's not that psyched about guest stars like Avery Schrieber or Kaye Ballard).
at July 18, 2007
Labels: comics, food, Muppets, TV