Batgirl: Year One TPB - I'm pretty sure I typed about this way back when I got it from the library a year or so ago, but damned if I can find the post now. Oh well, anyway, I liked it a lot, and I found a copy for cheap on eBay. It came, and pretty much went right into a moving box to re-read at some point after we're in to the new house, but I did thumb through it quickly, and that reminded me how good I thought it was. The story is a lot of fun. Which reminds me - tangent begins here - have there ever been any good Batgirl stories that weren't retcons? If she had been this awesome before Killing Joke, I don't think they'd have punked her the way they did. But then we wouldn't get Oracle or Birds of Prey, so maybe everything happened the way it should have, I dunno. Anyway, this story of Batgirl's origins keeps all the stuff that works and updates what needs updating, so that works out nice. And the artwork by Marcos Martin is beautiful. As I've stated time and again, I have a real weakness for cute Batgirls, and Martin definitely provides that, while at the same time showcasing her asskickery. Yvonne Craig would be proud. 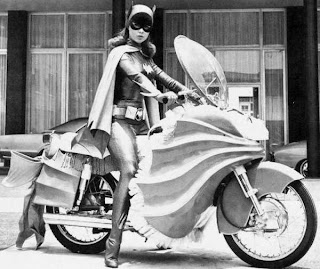 Yvonne and her frilly bike: Proud.

X-Men First Class: The Target Collection That I Can't Remember the Title Of Right Now - Despite not remembering the title of this, I thought it was pretty good. For one thing, it's the first 4 issues of the mini-series for $4.99, and that's pretty awesome. Thanks Target! It helps that the book was pretty fun. Light and airy, but it's clear that Jeff Parker has a good feel for the characterizations of Prof. X's original 5, without any of the excessive lameness that got the book more or less shelved back in the day. Plus, for all you continuity wanks out there, he actually drops in the occasional line about how and why the uniforms are different. Not that it should matter, but hardcore X-Men fans are a cowardly, superstitious lot, and they need that sort of silly handholding. Don't worry about whether or not it's canon - or even part of your own personal canon (my personal canon, for the record, actually includes the Colleen Coover stories from the First Class special a few months back... even the bunny one) - and just enjoy it. Think of it as Marvel Adventures X-Men if you like.

Blue Beetle 16 - Don't usually read this book, but I thought I'd check out this issue thanks to al the positive word of mouth, and I liked it quite a bit. Wasn't a big Jaime fan in the beginning, but between this and his Brave and the Bold appearance, I'm warming up. And Traci 13 seems like a really fun character, so I'm increasingly glad I ordered the Dr. Thirteen trade through DCBS last month. Her references to the Dibnys and her handling of Jeanclipso only won me over more (because as I've said before, wow did I hate Identity Crisis). I think I need to give this book another shot, especially if Traci becomes a regular.
at July 01, 2007
Labels: Batgirl, Blue Beetle, The Dig List, X-Men